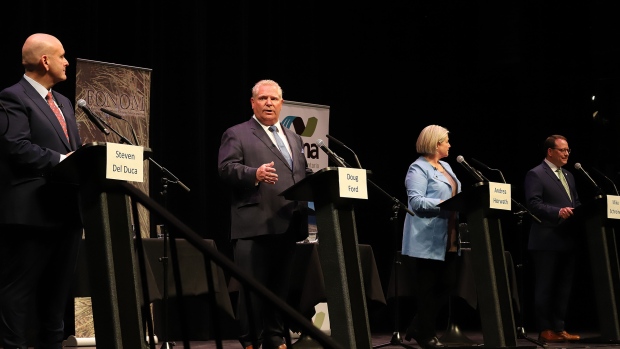 It’s been confirmed. The Ontario network television election debate will be on Monday. Like the North Bay debate this week, the session will showcase the leaders of the four parties with members elected under their party banners in 2018.

The Ontario Party is in a somewhat similar situation. It had a sitting member in Rick Nicholls, who joined its ranks after being ejected from the PC caucus. But because Nicholls wasn’t elected as an Ontario Party MPP that doesn’t count either.

So Doug Ford, Andrea Horwath, Steven Del Duca and Mike Schreiner will be back at it for another 90-minute session. This time you can expect the questions will focus on the key issues in the campaign. Look for the leaders to deal with inflation, housing and healthcare.

The Green Party released its platform on Thursday. It has eye-watering spending numbers. Mike Schreiner’ commitment to double payments for welfare and disability at a cost of $20 billion dollars over four years is one big ticket item. And that is just the beginning of the spending promises. To pay for it there are tax increases for corporations, the very wealthy as well a speculation tax for the owners of multiple residential properties.

The NDP already released its platform and rolled out policies, attaching costing estimates to the big ones. But to meet the fully costed benchmark the party still needs to table the technical charts to show the spending promises can be paid for. The NDP promise to release those this weekend.

The Liberal plan was released earlier this week. The Progressive Conservatives have not released a platform. Instead the Tories are leaning on the budget tabled in the legislature the two days before the campaign started.

Ford, Del Duca and Horwath faced questions this morning on the issues raised earlier in the week.

On Tuesday evening it came to light that Ford’s education minister for most of his first term, Stephen Lecce, took part in a “slave auction” while at university. Today, Ford accepted Lecce’s apology and said Lecce has his “full support.” Ford chose not to defend the salary top ups that eight of his MPPs received from their riding associations. Ford said he wasn’t “too happy about it” and said a new PC government would take a good hard look at the rules and “tighten them up.”

Earlier Horwath called on Ford to ban such payments but Ford did not commit to doing that. Horwath was asked about her future as leader of the NDP. The NDP leader, now in her fourth campaign as head of the party, insisted she is focussed on winning. She did call on the NDP to “get on board” to win the election.

Steven Del Duca’s Liberal Party, meanwhile, had to let another candidate go. This is the third in three days. It demonstrated the challenge facing a party holding only seven seats and scrambling to find more than 115 candidates. The three ridings are all held by the PCs and the Liberals stood little chance of winning in any of them. But it once again revealed how important it is for party recruiters to rake over the social media and Google offerings of potential candidates. Those three misses forced the Liberals off message. Headlines about bad candidate choices won’t help convince Ontario voters to turn to the Liberal party in three weeks.