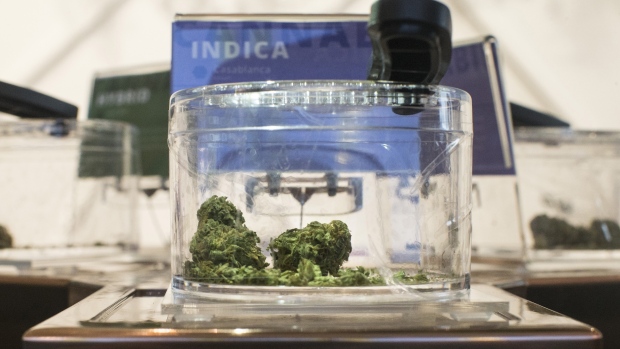 Cannabis is shown in a display jar on the first morning of opening for a Toronto retail store licensed to sell Cannabis in Ontario, on Monday, April 1, 2019. THE CANADIAN PRESS/Chris Young

TORONTO - New data shows sales made through Ontario's legal cannabis channels have overtaken those made through the illicit market for the first time ever.

The Ontario Cannabis Store said in its second-quarter report released this week that 54.2 per cent of the pot purchases made in the province between July and September were linked to legal retailers.

The figure is based on self-reported data that Statistics Canada collects from marijuana consumers, who may under-report purchases made in the illicit market because of the stigma cannabis still carries.

However, it suggests the cannabis market is at or nearing a long-awaited turning point after the legal industry spent the last three years slashing prices to compete with the illicit market and police raided a series of unlicensed dispensaries.

“When it comes to the unregulated market, (sales) are a difficult number to pinpoint, but assuming the reporting is true, it's not hard to believe,” said Jennawae McLean, the co-founder of Calyx + Trichomes, a cannabis store chain in Kingston, Ont.

“The number of stores in Ontario has grown exponentially over the last ... two years. It's really just completely exploded.”

The number of cannabis stores in Ontario soared to 1,115 in recent months, compared with 183 at the same time last year and 53 two years ago.

Now, the OCS says sales made through legal channels totalled $394 million in the second quarter, up from $204.3 million at the same time last year.

The most recent quarter's sales amounted to a record 56 million grams of cannabis.

McLean partially attributes that all-time high to the increasing number of cannabis stores that have made pot easier to access, but said legal channels are also attracting sales as customers realize how much is on offer.

“Yesterday I was working at one of my stores and I had this guy come in, and he was overwhelmed with the size of our menu, which, to be fair, is 27 pages long,” she said.

“He had no idea where to even start and he said that was because since he started smoking cannabis, he got it from a guy and didn't know what it was or what was available.”

Cannabis stores in the most recent quarter had 1,842 products on offer, including 389 that had just been added, said the OCS.

The product categories generating the most sales were dried flower, vapes and pre-rolls, while beverages, capsules, topicals and seeds were responsible for the fewest sales.

“This is a category that doesn't really exist in illicit, so it was really important to actually help bring those consumers into the legal market,” said the head of marketing for Truss Beverage Co., a joint venture between brewer Molson Coors Canada and cannabis company Hexo Corp.

But the cannabis beverage industry has not had an easy ride. Just as their products were hitting store shelves for the first time, the COVID-19 pandemic began.

Stores were temporarily closed in many provinces and with strict rules around cannabis marketing, beverage producers had to rely on word of mouth and customers stumbling across their products online.

“It was a brand new category and consumers weren't able to go into their local store and talk to the budtenders,” Hatcher said.

The OCS's second quarter covers a period when COVID-19 capacity limits, closures and other restrictions were lifting and shoppers were starting to gain the confidence to return to stores in person.

The OCS said those conditions translated to shoppers choosing brick-and-mortar stores for 96 per cent of their recreational cannabis purchases, but also resulted in OCS.ca sales as a percentage of total sales dropping to four per cent from eight per cent.

Consumers who ordered products ahead of picking them up or receiving them for delivery waited an average 2.41 days to receive them.