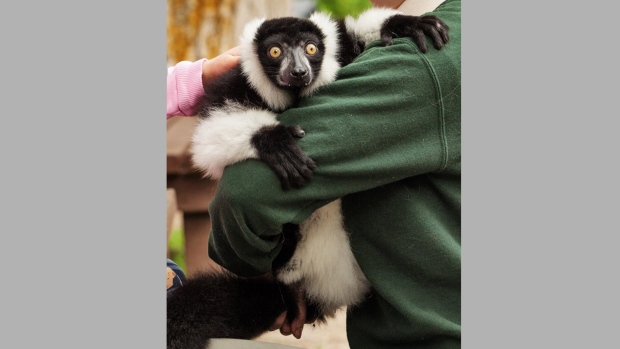 Police say a lemur who disappeared from an Ontario zoo following an alleged break-in is safe, but the hunt is still on for his compatriots - a tortoise and a gibbon.

Provincial police Sgt. Peter Leon says the lemur, known as “JC,” was found in Quebec early Sunday morning in a cage abandoned by the side of a road. Leon declined to comment on how the lemur got so far from home.

Police have alleged JC was stolen from the Elmvale Jungle Zoo northwest of Barrie, Ont., sometime between Monday night and Tuesday morning, along with Stanley the tortoise and Agnes the gibbon.

Police say two holes were cut into the zoo's chain link fence, noting that the accused would have had to walk through a flamingo pond to gain access to the animals that were taken.

Leon says two men were arrested on Friday - a 21-year-old from Ottawa and a 20-year-old from Mount Albert, Ont. - and charged with break and enter and theft over $5,000. He says police are hopeful that Agnes and Stanley will also be found safe.

In the meantime, JC has been taken to a local zoo to be cared for and officials from Elmvale are on their way to pick him up. Marina Huygen, an office worker at the central Ontario zoo, says the staff there is “beyond thrilled” to know JC is safe, but they're still concerned about the other animals' well-being.

“Every day I pray that we'll get some news about these three, and today we have JC back,” Huygen said Sunday. “I'm hoping that by the end of the day today or tomorrow I come in and they say, 'Agnes and Stanley are coming home too.”'

Leon said Montreal Police and Quebec provincial police are assisting in the investigation.