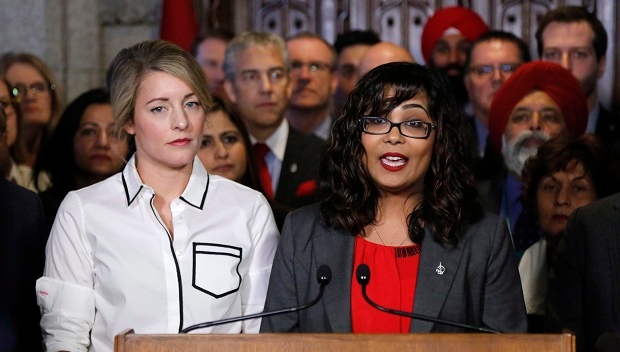 Liberal MP Iqra Khalid makes an announcement about an anti-Islamophobia motion on Parliament Hill while Minister of Canadian Heritage Melanie Joly looks on in Ottawa on Wednesday, February 15, 2017. (THE CANADIAN PRESS/ Patrick Doyle)

OTTAWA -- A Liberal MP who was targeted with hate mail and death threats last year over a motion to condemn Islamophobia and systemic racism has asked Twitter to investigate a parody account she believes has crossed the line from funny to hateful.

The Iqra Khalid account is one of more than 50 parody accounts created by what appear to be critics of the Liberal government, linked online under the hashtag "parodycabinet." The accounts exploded in late June when Twitter shut down one that veered too close to impersonating Environment Minister Catherine McKenna.

While some of the accounts criticize government policy or poke fun at various ministers, the Khalid account points out her Muslim heritage and accuses her of supporting Islamic State militants or Sharia law. At least one parody account of Immigration Minister Ahmed Hussen, who is also Muslim, features similar sentiments.

Khalid, who represents a riding in Mississauga, Ont., said she didn't think she would merit a parody account, since she's not in cabinet. She'd be fine with it, she said -- except for the fact this particular account goes too far.

"Everybody has the right to speak their mind, but freedoms come with responsibility and when we have the power to speak we should do it with care," she said in an interview.

"It's unfortunate that they are spreading fake news, and sowing fear and division."

One post she found particularly troubling came from a Hussen parody. It included a photo of a real flyer for her MP barbecue scheduled for this weekend, but called it an "anti-Canadian pro-Islamic Halal BBQ event."

"I'm not pissed off," Khalid said. "I just don't want the continual spread of misinformation."

The account counts more than 1,000 followers, although at least 50 of them are other parody accounts. Nor will it keep her from doing her work as an MP, she added.

"This isn't going to slow me down."

Twitter has already suspended or eliminated several accounts that were the subject of complaints, including at least two parodies of Environment Minister Catherine McKenna.

One of them was mistaken by several people for being the actual minister of environment, a violation of Twitter's policy, triggering its demise and prompting a debate among Liberals and Conservatives alike about government interference in free speech.

Another parody account, this one focused on Foreign Affairs Minister Chrystia Freeland, was recently suspended briefly, then reinstated, prompting the person behind it to vent -- anonymously -- about freedom of speech.

"Who are you doing these favours for?" the person tweeted in reference to "vigilantes" who are reporting the accounts.

"We are not engaged in hate speech, or discrimination, so you are robbing your own children of the freedom of expression."