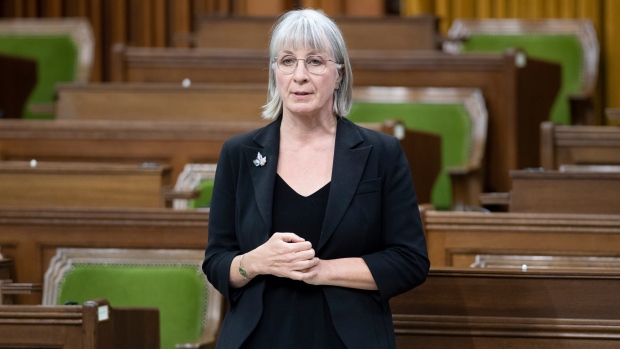 Minister of Health Patty Hajdu rises during a sitting of the Special Committee on COVID-19 in the House of Commons Thursday May 28, 2020 in Ottawa. THE CANADIAN PRESS/Adrian Wyld

OTTAWA - Justin Trudeau is being pressured by some of his own Liberal backbenchers to implement enforceable national standards for the operation of long-term care homes in Canada.

The pressure came Thursday from five Toronto-area Liberal MPs, whose ridings are home to some of the elder-care facilities that have been devastated by COVID-19.

And it came just as the prime minister was preparing for his 11th conference call with premiers since the COVID-19 pandemic hit Canada in mid-March.

He had promised to repeat on the call his offer of federal help to improve conditions in care homes and to provide paid sick leave for workers forced to stay home due to COVID-19.

Both issues fall squarely within provincial jurisdiction and could test the Team Canada spirit that has prevailed among first ministers so far during the COVID-19 crisis.

Trudeau's offer of help has met with a mixed reaction so far from provincial and territorial leaders.

In a letter to Trudeau and Health Minister Patty Hajdu, the five Liberal MPs upped the ante, asking Ottawa to call on the Ontario government to launch a full, independent, public inquiry to investigate the failings of the province's long-term care system and make recommendations for fixing them.

Those failings were exposed in appalling detail earlier this week in a scathing report by the military, which has been called in to help out in long-term care homes in Ontario and Quebec. The report cited examples of neglect, abuse and unsanitary conditions in five Ontario homes.

Similar problems had been reported in some Quebec homes in April, although a military report this week on that province said conditions have now improved somewhat.

“The significant number of deaths in long-term care homes related to COVID-19 is not unique to our constituencies,” they wrote.

“It is a tragedy taking place across Canada as approximately 80 per cent of all COVID-19-related deaths across our country have occurred in long-term care homes.”

So far, Trudeau's weekly conference calls with premiers have been notable for their collegial, collaborative spirit as they all work as one to cushion the impact of the deadly pandemic on Canadians' health and the country's economy.

But there are signs that team spirit may be starting to give way to the usual regional tensions and jurisdictional spats that have historically bedevilled federal-provincial relations in Canada.

Quebec Premier Francois Legault, whose province has always jealously guarded its jurisdiction against perceived federal intrusions, is lukewarm about Trudeau's promise to ensure 10 days of paid sick leave for workers who fall ill with COVID-19 or are required to go into quarantine.

“I told Justin Trudeau this morning first, regarding sick leave, that there was a very negative reaction from the corporate side,” he said Wednesday.

“Well, obviously, there is a question there that isn't clear: Who will pay?”

On long-term care homes, Legault came close to suggesting the feds should butt out, apart from sending the provinces more money for health care in general which they could then spend as they see fit.

At the outset of the pandemic, the federal government did increase those transfers by $500 million.

In contrast to Legault, Ontario Premier Doug Ford has been effusive in his thanks for the offer of federal help to fix what he calls “this broken system.”

Ford too has called for more federal funding but he's gone beyond that. He's said “everything is on the table,” including integrating long-term care homes into the public health system, which is delivered by the provinces but under the national principles of the Canada Health Act.

And he's called for national standards for such facilities.

“We need a system standard ... a standard operating procedure that applies right across the country, no matter if it's in Quebec or Ontario or B.C.,” he said Tuesday.

Trudeau has been careful so far to avoid wading into specifics, repeatedly stressing the federal government will respect provincial jurisdiction as it embarks on discussions with the premiers.

Trudeau must also deal with the fact that not all provinces have been as hard hit by the pandemic as Ontario and Quebec and are less keen to have the feds rush in with help.

Saskatchewan Premier Scott Moe said all provinces need federal funding to help defray pandemic costs but suggested his province doesn't need it for long-term care homes. He said Saskatchewan already has standards and noted that its homes have not been subject to the high death rate experienced in the two largest provinces.

On sick leave, Moe said if it's a federal initiative, it should be federally funded and employers should not have to foot any part of the bill.

“There can be no cost to the businesses that are just trying now to dust themselves off and reopen and get back into the marketplace,” Moe said Thursday.

He also said any pandemic-specific measures should have an end date, as longer-term conversations about sick leave belong in collective bargaining.

Manitoba Premier Brian Pallister shared Moe's concern that businesses shouldn't be on the hook but nevertheless welcomed a national program to encourage any worker who feels ill to stay home.

Trudeau has credited British Columbia Premier John Horgan with first raising the idea of a sick leave program. And Horgan appeared optimistic Wednesday that agreement can be reached among first ministers to put one in place.