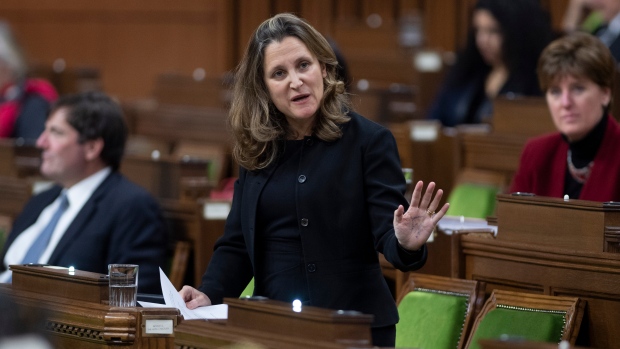 Deputy Prime Minister and Minister of Finance Chrystia Freeland responds to a question during Question Period in the House of Commons Monday November 23, 2020 in Ottawa. THE CANADIAN PRESS/Adrian Wyld

OTTAWA - Chrystia Freeland's voice perked up as she started to discuss child care during a virtual fundraiser this week.

She explained how an issue near to her had become top of mind for corporate executives, who had begun banging on her door about a national program.

The federal finance minister said the pandemic's hit to women in the workforce had produced an “epiphany” about the need for child care.

“Not going to be easy,” she said Thursday night.

“But I think we all need to take a deep breath and get it done.”

The first step is expected Monday, when Freeland delivers an economic update that business and labour groups hope includes something on child care.

But those groups also say Freeland must outline both concrete proposals to manage COVID-19 in the short term and long-term steps for recovery.

“If you just put numbers on a sheet of paper, it probably doesn't tell the story they want. They need to build a case for what they've been doing, (and) what they are aiming at,” said Robert Asselin, a former economic adviser to the Trudeau Liberals, now senior vice-president for policy at the Business Council of Canada.

Likewise, Elliot Hughes, who was an adviser to former finance minister Bill Morneau, said Freeland's update should provide Canadians a sketch of an economic vision.

That may include not only talk about child care, but also vaccine distribution and skills training and a long view on post-pandemic plans. The Liberals' have promised a “green” recovery, and NDP Leader Jagmeet Singh called on them this week to deliver.

“People are already turning their sights on to what the recovery is going to look like,” said Hughes, now with Summa Strategies.

“Responding to that would be something, I think, Canadians are interested in.”

The fall economic statement should have a full accounting of pandemic spending so far, and the depth of this year's deficit, which in July was forecast at a historic $343.2 billion.

There are varying estimates of what the deficit is now. A report Friday from RBC forecast a deficit close to $370 billion, while a separate report from Scotiabank said $425 billion is possible.

Rebekah Young, Scotiabank's director of fiscal and provincial economics, wrote the actual number shouldn't be as much a focus as the programs that create it.

“Namely,” she wrote, “is it growth-enhancing investments that will support stronger growth, or is it tilted toward stronger social spending that drives structural deficits?”

The Liberals are facing calls for targeted help for sectors that need an extra hand, such as airlines and restaurants, to avoid a post-pandemic recovery in which some workers and businesses do well while others fall further behind.

The cost of that targeted help depends on the duration of the pandemic and the severity of the second, or even third, wave of COVID-19, said Perrin Beatty, president of the Canadian Chamber of Commerce.

“What we need to do is to make sure that we are providing assistance to those who need it and not to those who don't,” he said.

Dan Kelly, president of the Canadian Federation of Independent Business, said there is still a need for spending to help the small businesses he represents stay open.

“Even a fiscally hawkish organization like mine is deeply aware that we're going to have to run up gigantic deficits in order to keep the lights on in the economy long enough for us to put COVID in the rear-view mirror,” he said.

Hassan Yussuff, president of the Canadian Labour Congress, said the government should use the fiscal update to announce a long-promised review of the employment insurance system, bump up the federal minimum wage, and take a step toward national pharmacare.

“There should be some indication â€¦ that these things are still a priority for them and they're going to continue to work to that reality,” he said, adding that some measures may need to wait until next year's budget.

A group of experts at C.D. Howe Institute estimated in a separate report Friday that promises from the Liberals' agenda-setting throne speech earlier this fall would amount to between $19 billion and $44 billion in permanent annual spending.

The Liberals have said there won't be a specific “fiscal anchor” that will put limits on how much they're willing to borrow and spend - such as a deficit target or a limit on the size of the federal debt - but “guardrails” to guide spending decisions until the crisis has passed.

With a starting deficit next year that RBC and Scotiabank estimate at $90 billion and $140 billion respectively, the Opposition Conservatives say they want to see a plan to rein in spending over time.

“In the long run, we have to protect our finances,” said Pierre Poilievre, the party's finance critic. “In order to protect taxpayers and our treasured social safety net, we need to know the limits the government is placing on that debt.”

-With files from Joan Bryden and Stephanie Levitz