TORONTO - Ontario Premier Kathleen Wynne was considering her legal options Thursday after the Opposition leader refused to retract comments that she warned could lead to a defamation lawsuit.

Her lawyers sent Brown a letter demanding he withdraw comments that suggested Wynne is personally on trial and apologize.

The next day, Brown made it clear he wouldn't be doing either. He responded to multiple questions about why by repeating that it was a “sad day for Ontario” to see the premier “humiliated” by testifying in court.

“No one wants to see a sitting premier debased,” he said. “I think it's important that we move on.”

“I will ignore her baseless threat,” he said.

Wynne, speaking to The Canadian Press in Washington, D.C., wouldn't say whether she will proceed with a lawsuit.

“We'll see what happens,” she said. “My letter stands. It speaks for itself.”

Wynne said her lawyers are discussing the next steps, while they said they're awaiting instructions from her.

“Fair political criticism is one thing, but as a public figure himself, one might have thought that he would recognize that untruths that defame another politician are unacceptable,” Siegel said in a statement.

Brown's office had previously suggested he misspoke. Siegel questioned why Brown wouldn't just retract the comments if that was the case.

“Mr. Brown's refusal to take that simple step therefore suggests that this was not an accident and that his remarks were deliberately made with the intention of harming the reputation of the premier,” Siegel wrote.

At issue are comments Brown made Tuesday about the premier's role in the bribery case.

Wynne is not on trial or even under investigation, but offered voluntary testimony, her lawyers noted. Wynne could have used parliamentary privilege to avoid testifying.

The Tories had questioned who footed the bills for two staffers to travel to Sudbury with Wynne for her testimony, as well as for Siegel to draft the legal threat to Brown. Deputy premier Deb Matthews said the Liberal party paid for both. The party is also paying for the legal bills of Sorbara, Lougheed and the premier.

This is the second time in a week that the Liberal government has threatened legal action over remarks made by a Progressive Conservative member of the provincial legislature about the Sudbury trial.

Last week, Bill Walker told a radio station Wynne was under investigation and facing charges in connection with the bribery trial. He issued a statement apologizing for the remarks.

Wynne previously sued Hudak and another Tory member of provincial parliament after the pair said she oversaw - and possibly ordered - the destruction of documents related to two cancelled gas plants.

That lawsuit was resolved in 2015, though it is not known whether it was settled or withdrawn.

Two ex-staffers under former premier Dalton McGuinty are on trial on those allegations. 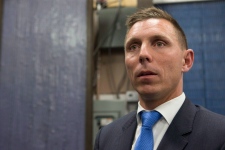