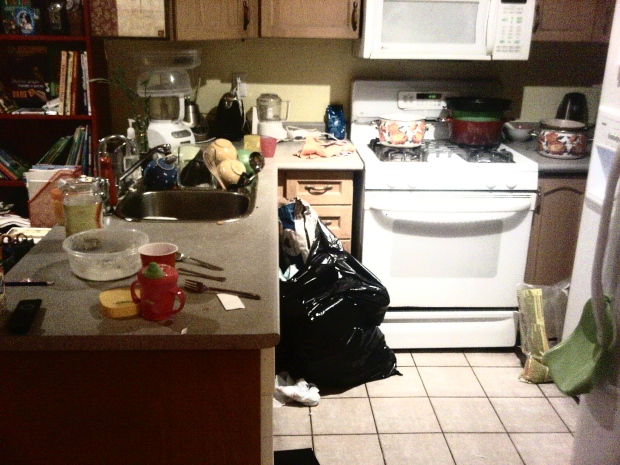 The kitchen inside a Vaughan home that was operating as an illegal daycare is shown in a photo taken by public health inspectors and included in a document obtained through a freedom of information request by the Ontario Coalition for Better Childcare. (York Region Public Health)

A deadly strain of bacteria was found in three different food items at an unlicensed Vaughan daycare where a toddler died earlier this summer, according to a report by a public health inspector.

According to the report obtained through a freedom of information request by the Ontario Coalition for Better Childcare, a chicken and potato stew, an uncooked grain product and a package of deli meats all tested positive for Listeria Monocytogenes after samples of the items were collected during an inspection on July 9.

The health inspector also found a number of expired or rotting food items in the fridge, dirty diapers in the kitchen garbage, a lack of proper hand washing facilities in the kitchen and toys that were not properly sanitized elsewhere in the home.

The stew was found sitting on the counter, where it had presumably been since being served for lunch the day before, the public health inspector wrote in the report.

“It was stunning to hear what the conditions were like in that home for those children. There were chemicals and food both mixed under the sink and no sanitizing products in the kitchen or the home itself that would adequately sanitize toys or even surfaces,” Ontario Coalition for Better Chilcare Coordinator Andrea Calver told CP24 Friday. “This was an absolute nightmare for the public health staff and I imagine the parents reading about it today.”

The inspection was done the day after two-year-old Eva Ravikovich died while under the care of the facility.

Ravikovich’s cause of death has not yet been disclosed, but the toddler’s parents have filed a $3.5 million lawsuit against the owner of the daycare alleging that the facility was overcrowded and that the owner/operators failed to provide adequate care and supervision as a result.

The lawsuit also names the Ministry of Education as a defendant, alleging that the ministry failed to inspect and regulate the daycare, which had been the subject of several previous complaints.

The daycare located on Yellowood Circle was ordered to close by the province on July 19, following the inspection.

Eva Ravikovich, 2, died at an unlicensed daycare in Vaughan on July 8, 2013. (Facebook)