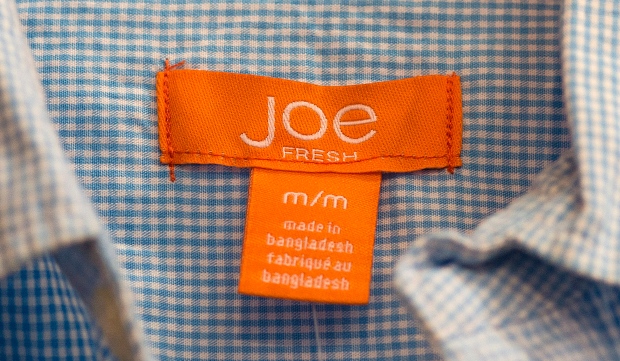 A Joe Fresh garment made in Bangladesh is shown at a Loblaws outlet in Montreal on Thursday, April 25, 2013. (The Canadian Press/Graham Hughes)

TORONTO -- Loblaw Inc. is sending senior company officials to Bangladesh in the wake a building collapse that killed hundreds of garment factory workers where some Joe Fresh clothes were made.

Canadian clothing line Joe Fresh, sold in Loblaw (TSX:L) stores, was among the customers of the factories operating in the building and has faced fierce customer backlash this week.

Loblaw Inc. will also be one of several major Canadian retailers to take part in an "urgent" meeting Monday with the Retail Council of Canada.

The retail council's president and CEO wouldn't confirm what other companies will be involved in the meeting, other than to say it will be a strong representation of retailers across the country, including those who usually participate in the council's responsible trade committee.

"We will be looking at what are the efforts that have been made and what else needs to be done? Where do we need to put pressure? We will also be discussing these issues with the federal government," said Diane Brisebois.

Senior representatives from Loblaw's supply chain team will meet with local officials in Bangladesh to get "a precise response on what caused this tragedy," the company said in a statement late Friday.

"We are aligning with other apparel retailers to support local efforts and provide aid and resources," spokeswoman Julija Hunter said in the statement.

"We are committed to finding an approach that ensures safe working conditions, drives lasting change in the industry and help prevents other tragedies."

Rescuers in Bangladesh dug through mangled metal and concrete Friday and found more survivors, but they also found more corpses that pushed the death toll past 300.

Police say cracks in the walls had led them to order an evacuation Tuesday, but the garment factories in the building ignored the order and were operating when the building collapsed the next day.

Officials said soon after the collapse that numerous construction regulations had been violated.

Abdul Halim, an official with Savar's engineering department, said the owner of Rana Plaza was allowed to erect a five-story building but had added another three stories illegally.

Agencies in Canada don't have the power to mandate that certain codes or regulations are followed in another country, she said.

"So the challenge has been in the past that while there has been a huge effort through global groups to affect change, unless we can affect change with the local governments...it's very, very difficult to mandate those things from hundreds or thousands of miles away," Brisebois said.

Loblaw said its vendor standards were designed to ensure that products are manufactured in a socially responsible way but that current measures do not address the issue of building construction or integrity.

One of Canada's highest profile labour groups criticized the Canadian government on Friday for being silent about previous labour violations in Bangladesh.

The federal government is "thus complicit in the recent tragic event," said a statement from the Canadian Labour Congress.

Safety audit measures were obviously lacking or not enforced by the Bangladeshi company involved in the latest tragedy, CLC President Ken Georgetti said in the statement.

"Unfortunately, Canada is visibly absent from international discussions to reform current social auditing systems, and to impose accountable reporting standards on companies such as Loblaws, which buy products from other countries."

Canada and other countries should be more aggressive in pushing for a strong and enforceable system of workplace health and safety in Bangladesh, Georgetti said.

"Failing compliance on these matters, Canada should refuse trade with Bangladesh, a country that openly flaunts the enforcement of labour standards in a way that allows such events to occur."

The seach was continuing on Friday for survivors. By the evening more than 80 survivors had been rescued, according to officials at a command centre.

The search will continue into Saturday, officials said, with crews cautiously using hammers, shovels and their bare hands.