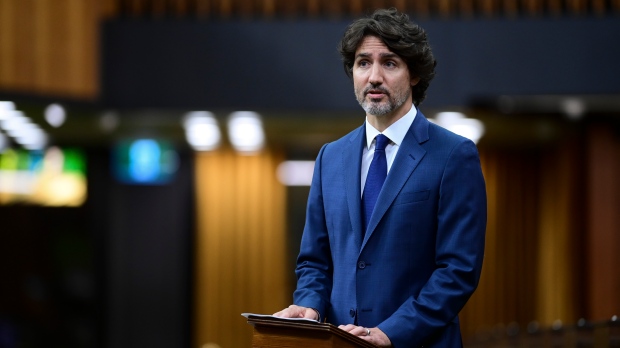 Prime Minister Justin Trudeau delivers a statement in the House of Commons on Parliament Hill in Ottawa on Tuesday, June 8, 2021, regarding the recent tragedy in London, Ontario. THE CANADIAN PRESS/Sean Kilpatrick

Prime Minister Justin Trudeau says the attack in London, Ont., that killed four members of a Muslim family and left one child in hospital was an act of terrorism.

After observing a moment of silence for the victims, Trudeau spoke in the House of Commons and called the assault “a terrorist attack, motivated by hatred.”

“Their lives were taken in a brutal, cowardly and brazen act of violence,” Trudeau said. “This killing was no accident. This was a terrorist attack, motivated by hatred in the heart of one of our communities.”

Police said a man intentionally drove a truck into the family out for a walk on Sunday evening, and that he targeted them because of their faith.

Trudeau said he's horrified by the attack and that his government stands in solidarity with the victims' loved ones during this extremely difficult time.

“This is unfortunately not an isolated event,” Trudeau said. “So many other people across the country who faced insults, threats and violence. They were all targeted because of their Muslim faith. This is happening here in Canada and it has to stop.”

Conservative Leader Erin O'Toole said he grieves with Muslim community members in London and across the country because this is a pain they have known before.

The latest statistics show that in 2017, the year of the Quebec City mosque shooting when a gunman killed six people, the incidents of police-reported hate crimes against Muslims in Canada rose to 349 cases - a 151-per cent increase from the 139 cases recorded in 2016.

However, Statistics Canada says about two-thirds of hate crimes across the country go unreported.

Singh said many people live in fear because of the way they look. He said most of the hatred stems from prejudice based on identity and faith.

Singh said Canada must acknowledge that the urgent threat to public safety comes from extreme right-wing ideology, white supremacy and hate groups that radicalize people, adding there must be resources to address these dangers.

Trudeau said the government will continue to fund initiatives like the Security Infrastructure Program to protect schools and places of worship for communities at risk. He added the Liberals will also continue to fight hate online and off-line, which will include more action to dismantle hate groups.

“We will continue doing everything we can to keep communities safe.”

Trudeau is scheduled to be at a vigil outside the London Muslim Mosque this evening. The prime minister also offered opposition leaders transport via Challenger to London, Ont.

An adviser to Green party Leader Annamie Paul said she'll also attend the vigil and will go to London via an electric car.

Singh's office said he will travel separately to attend the vigil.

“I will be joining my Muslim friends and family in London today,” Singh wrote in a tweet. “To grieve with them. To pray with them. To be with them. Because that's what we do for the people we love.”