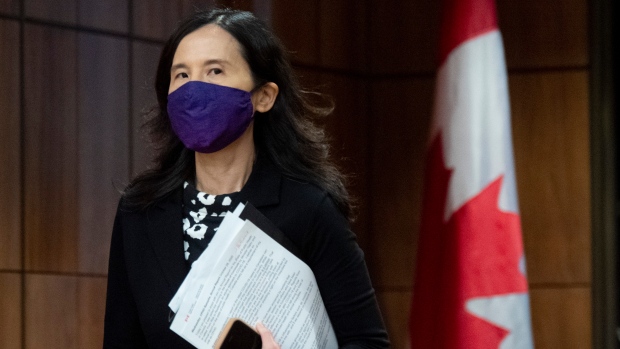 Long-term care deaths accounted for nearly 80 per cent of COVID-19 cases in Canada during the first wave of the pandemic, but the country's chief public health officer thinks a repeat can be avoided amid a new spike in cases.

A snapshot of Canada's COVID-19 situation during the first wave of the pandemic was outlined in Dr. Theresa Tam's annual report released Wednesday, one day after Canada passed 10,000 COVID-19 deaths.

“Everything has been done to prevent the repeat of what we're seeing in the first wave,” Tam said, adding that more support and stricter rules are in place in facilities housing the country's most vulnerable population.

“I think what we have seen is there has been a number of best practices, infection prevention control practices within long-term care facilities, and they have to be followed diligently.”

She says those groups are disadvantaged in Canadian society and were disproportionately affected by COVID-19.

“The virus didn't create new inequities in our society,” Tam said. “It exposed them and underscored the impact of our social policies on our health status.”

A new Statistics Canada report Wednesday noted that discrepancy, finding communities with the most visible minorities in the country's four biggest provinces had the highest mortality rates during the first wave of COVID-19.

The report's authors said Wednesday it is more evidence that the pandemic is disproportionately affecting visible minorities, who are more likely to live in overcrowded housing and work in jobs that put them more at risk of exposure to COVID-19.

Going forward, Tam said strong leadership, firm data and sustained funding for public health were are all keys in fighting the pandemic.

“One thing that is difficult for public health is to advocate for sustained investments and avoid the sort of boom and bust,” Tam said.

“Public health is invisible when there are no cases, when we've done our job, so it's very difficult to advocate for public health capacity when you've prevented things from happening.”

The country's hardest hit provinces remain Quebec and Ontario, with Premier Doug Ford saying the numbers Wednesday were trending in the right direction with 834 new cases and five additional deaths.

Tam said while the younger age groups have been driving infections during the second wave, the cases are starting to enter long-term care homes. However, most outbreaks have been smaller than the first time around.

COVID-19 hit Canada's long-term care homes hardest during the first wave of the pandemic. The Public Health Agency notes that as of August, Canada had one of the highest fatality rates among long-term care home residents out of the 37 countries in the Organization for Economic Co-operation and Development.

Also, people working in essential services were at higher risk of exposure, with health-care workers accounting for 19 per cent of national cases as of mid-August and outbreaks reported in 23 agricultural workplaces during the same time frame.

On Wednesday, Statistics Canada said the more than 7,000 excess deaths recorded during March and June are comparable to COVID-19 figures from the Canadian Vital Statistics Death Database - the official source of death-related data in Canada.

The statistics agency said the number of deaths dipped to normal levels in July but has surged again during the first 10 days of October, surpassing monthly totals for August and September and suggesting Canada will see an increase in excess deaths this month.

Excess mortality, more deaths than usual during a period of time, is an important measure in understanding both the direct and indirect effects of the COVID-19 pandemic.

“I think it shows the majority of excess can be accounted for by COVID-19,” Tam said. “But there could be other excess mortality, sometimes as a result of some of the measures that we've put in.”