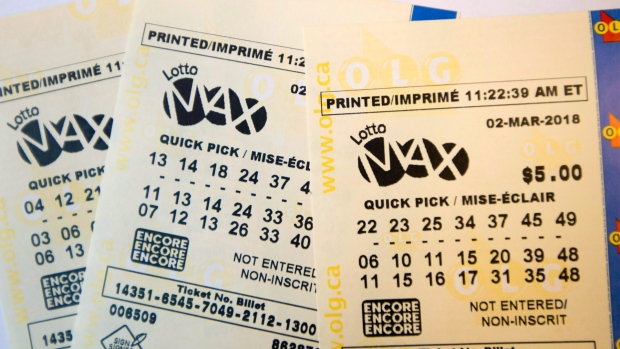 A lotto Max ticket is shown in Toronto on Monday Feb. 26, 2018. Social media is abuzz about a history-making $60-million lottery win that will apparently make a group of people in Newfoundland and Labrador instant millionaires. THE CANADIAN PRESS

There are four big winning tickets in Ontario, though Lotto Max’s whopping $70 million prize is still up for the taking.

An Encore prize-winning ticket worth $100,000 was also sold to someone in Vaughan, the OLG says.

Lotto Max players may have noticed a delay in announcing the results on Tuesday night. The OLG said that was a result of a technical issue in another province.

There are a few ways players can check to see if they have the winning ticket. OLG says they can either check online at OLG.ca, on their mobile app, or by signing up for winning number email alerts.

This Friday, the Lotto Max jackpot will not only have the $70 million jackpot up for grabs but also an estimated 56 $1 million Maxmillions prizes. That makes the grand total for this week’s prizing $126 million.

Players can buy their tickets at any authorized OLG retailer or online until 10:30 p.m. on Friday for this week’s draw.