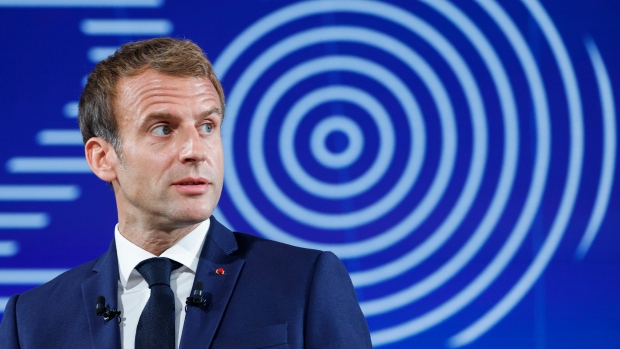 Kareen Rispal, France's ambassador to Canada, said that in addition to unfinished business the two countries started before the COVID-19 pandemic, Macron wants to hear Trudeau's views on the alliance formed last month between the United States, Britain and Australia.

The new AUKUS alliance angered Macron and was seen by France as a stab in the back from trusted allies.

Trudeau has shrugged off Canada's exclusion, saying the alliance is about selling Australia nuclear submarines - something that doesn't interest Canada.

“It's very vague. The only announcement about this club is the perspective of providing Australia with submarines,” Rispal said in a recent interview at the French Embassy in Ottawa.

AUKUS was formed to help Australia deal with the fallout it has faced over China's rising influence in the Indo-Pacific. Helping Australia acquire a fleet of nuclear submarines was touted as the key feature, but it has also established greater co-operation in the defence industries of all three countries.

That angered France because its defence contractors also build nuclear submarines. Macron responded to the AUKUS announcement by pulling his ambassador out of Washington.

He has since returned to his post, while top Biden administration officials are working hard to heal hurt French feelings. U.S. Secretary of State Antony Blinken travelled to Paris last week to meet Macron. Macron is working on a setting up a meeting with President Joe Biden.

“It's very important to get together and have a meeting in Paris or Ottawa quite soon, and to discuss strategic matters. We are eager to strengthen our transatlantic link,” said Rispal. “We have relations of confidence and trust and friendship with Canada.”

A spokesman for Trudeau said he was pleased to participate with Macron at Tuesday's virtual G20 leaders' summit on Afghanistan and to meet him in person at the G7 gathering hosted by Britain last June, but he was unable to confirm any pending meeting.

“Prime Minister Trudeau looks forward to sitting down again with President Macron at the earliest opportunity,” spokesman Alex Wellstead said in an email.

Both countries are deeply seized with the growing challenges in the Indo-Pacific, especially China's growing military and political influence, Rispal said.

“I think that Canada, like France is very aware that China is a competitor - could be a partner on some subjects, and can be military or strategic threat,” said Rispal.

“I think we share the same view that the model that Beijing wants to impose is not the one that we want to expand,” she added, citing Canada and Frances's views towards human rights and the need to respect international law and trade rules.

Rispal said the pandemic has prevented any meaningful follow-up on an agreement Macron and Trudeau signed three years ago to deepen co-operation on promoting democracy and gender equality, as well as fighting climate change.

Macron visited Ottawa in June 2018 for a one-on-one with Trudeau before the G7 leaders' summit in Charlevoix, Que., where the pair agreed to create a Franco-Canadian Council of Ministers that was supposed to meet every two years. But it hasn't due to the pandemic.

“COVID is maybe not over, but you know, we are in a better position,” said Rispal. “It's time to be together physically in the same room. And to have a strong discussion about strategic matters, about economic matters, about innovation, about the environment.”

Macron wants a meeting before the end of 2021, she added.

The electoral calendars of France and Canada are squeezing both leaders. Canada's election has recently come and gone, but French voters are to go to the polls in April.

“The window is narrow,” said Rispal.

This report by The Canadian Press was first published Oct. 12, 2021.