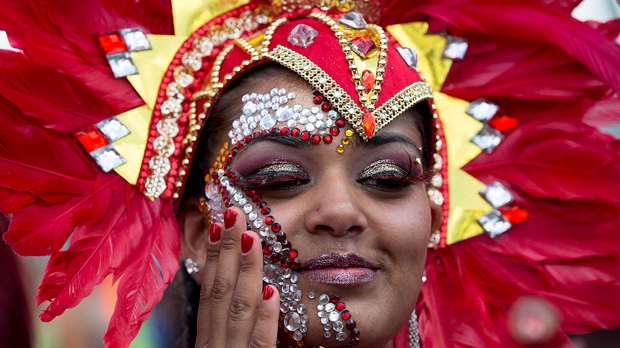 A parader checks on her jewels during the Caribbean Carnival in Toronto on Saturday, August 3, 2013. THE CANADIAN PRESS/Michelle Siu

A number of major road closures will be in effect downtown this weekend as the Toronto Caribbean Carnival takes over Toronto.

The 52nd annual Toronto Caribbean Carnival Grand Parade is scheduled to take place on Saturday, August 3, 2019. The parade will run from 8:30 a.m. to 9 p.m.

There will be a number of "Blockorama" style parties at locations throughout Exhibition Place and along Lake Shore Boulevard West.

Police are warning that the festival will require numerous road closures and restrictions, which will lead to delays and congestion around the parade.

"The traffic conditions in the Downtown area, Lake Shore Boulevard West, The Queensway, Queens Quay West and the Fred Gardiner Expressway are expected to be very heavy," Toronto police said in a news release.

People are being advised to take transit to and from the festivities and the TTC says that it will be adding extra service to get people around.

Road Closures around the Exhibition Place Grounds and Lake Shore Boulevard West will take effect on Saturday, Aug. 3 at 2 a.m. and will remain in effect until Sunday, Aug. 4 at approximately 6 a.m.

The following Gardiner Expressway ramps will be closed at 2 a.m., on Saturday, Aug. 3:

Police are warning that the Gardiner Expressway will be patrolled to ensure that vehicles are not parked near the parade route and that pedestrians do not enter the highway area.

"Drivers who choose to stop or drive in a manner that puts other road users at risk will be subject to strict enforcement," police said.

The following streets will have restricted access for vehicles:

All streets from Roncesvalles Avenue to Strachan Avenue, south of King Street are local traffic only starting at 8 a.m. Saturday, Aug. 3.

Police say parking restrictions will also be strictly enforced on surrounding streets in the area bounded by King Street West., east of Colborne Lodge and west of Bathurst Street.