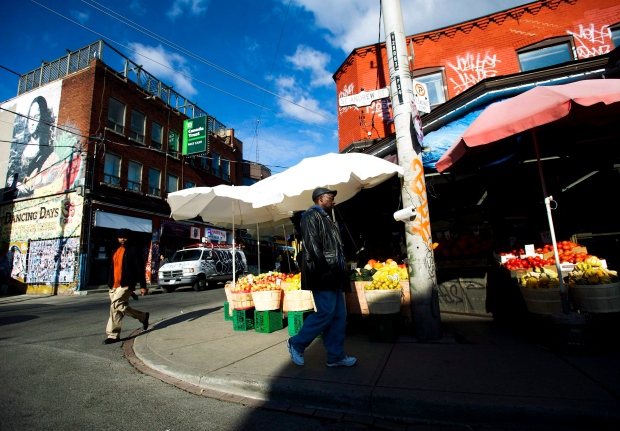 People walk around at Kensington Market in Toronto, Nov. 14, 2012. (The Canadian Press/Nathan Denette)

The majority of Torontonians are against plans to build a Walmart near Kensington Market with critics of Mayor Ford the most uniformly opposed, according to a new poll from Forum Research.

The random telephone survey found that 60 per cent of respondents are not in favour of allowing the department store to be built on Bathurst Street near College Street, just west of the market.

The proposed development, which would include the Walmart and an underground parking lot, is currently being considered by the Ontario Municipal Board as it does not fit with the city’s official plan.

Speaking with CP24 Tuesday afternoon, Coun. Mike Layton said it is not surprising to see widespread opposition to the idea.

“We are hearing the same type of concerns from the residents that live in the area as well as the business owners and we are hoping we can guide this process so that we don’t hurt the local businesses but the city may have to take a position and I would suggest it would be against putting a big box store right in the middle of such a vital and exciting part of the city,” Layton said.

Opposition not restricted to downtown core

The poll grouped respondents into four regions and found that opposition to a Walmart is strongest in Toronto East York and Scarborough (62 per cent) with residents in North York and Etobicoke (57 per cent) less opposed to the idea.

According to Kensington Market BIA Chair Mike Shepherd, the poll proves that opposition to the development isn’t just a fringe movement.

So far more than 80,000 people have signed a petition saying they don't want a Walmart built near Bathurst and College streets.

“I think it is going to be a huge factor because it is not just two councillors and their wards, it is city-wide,” Shepard told CP24. “People in Scarborough are saying you know what when I go to Kensington Market I don’t want to see a Walmart near it.”

A second public meeting on the proposed development will be hosted by the city’s planning department on July 9 at city hall.

Walmart did not comment on the poll Tuesday, but in a statement the U.S. based department store chain said it has “enormous respect” for the process and is paying “extremely close attention” to the ongoing dialogue.

In addition to the proposed Walmart the poll also asked Torontonians for their opinion on a number of other issues affecting life in the city, including the use of major roads and arteries for parades and marathons.

Of those polled about 45 per cent said they approved of such events being held on city streets while 37 per cent said they would prefer to see parades and marathons held in city parks instead. Opposition was highest among those who support Mayor Rob Ford (53 per cent), those at least 65 years old (48 per cent) and those who drive to work or school.

Asked specifically about marathons, 60 per cents of respondents said the money and awareness that they raise make the inconvenience worth it while 22 per cent said that they are not worth the trouble and 18 per cent said they don’t have an opinion.

The poll, which was conducted on June 25, is considered accurate to within three percentage points, 19 times out of 20.