Majority support Uber in the GTA, but many concerned about passenger safety: poll 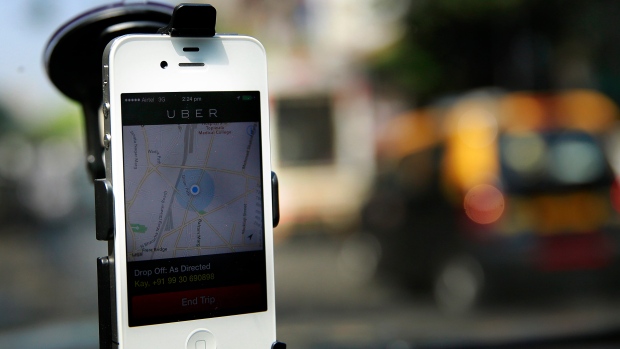 In this 2014 photo, a smartphone is mounted on the glass of an Uber car. (AP / Rafiq Maqbool)

As Uber ridership numbers continue to grow in the GTA, it appears even those who don’t currently use UberX still support letting the controversial service stay on the road.

According to a new poll conducted by Environics Research, nearly 50 per cent of respondents who don't use Uber say they still would like to see UberX stay in business.

Overall, 56 per cent of the 1,005 GTA residents polled said they support allowing UberX to operate in their community and support was considerably higher among younger adults, those earning higher incomes and those who have previously used the service.

Despite support for the service, many do still have concerns about passenger safety.

According to the poll, 61 per cent are “very” or “somewhat concerned” that Uber drivers aren’t licensed by their municipality. Sixty per cent also say that they are concerned about their personal safety because the drivers are not municipally licensed.

“Those who have used the ride-sharing app Uber love its convenience and simplicity. They also appreciate how just by clicking their smartphones, they can have a driver pick them up and take them where they need to go for less than it would cost to take a traditional taxi,” analysis from the poll’s author read.

“But even though increasing numbers of Greater Toronto Area (GTA) residents expect to use this service in the coming months, concerns about regulation and passenger safety are critical barriers to increased support for Uber in the GTA – and elsewhere in the country.”