A male is dead following a shooting in Etobicoke, Toronto police have confirmed.

It happened in the Kipling Avenue and The Kingsway area a short time ago.

The victim – whose age was not immediately provided – was pronounced dead at the scene, police said.

The circumstances surrounding the incident were not immediately clear.

One area resident said she was shocked by news of the shooting.

“The neighbourhood is a very, very quiet, very safe neighbourhood,” the resident, who identified herself only as Natasha, told CP24.

“The crime is almost non-existent. There aren’t any robberies, or car thefts, or things like that. It’s very, very safe – people are always walking their dogs.”

No suspect information has been provided by police. 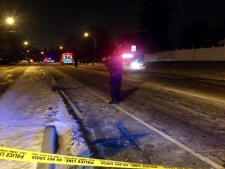 Police officers are seen following a fatal shooting in Kipling Avenue and The Kingsway area on Wednesday, Jan. 20, 2016. (CP24/Cristina Tenaglia)