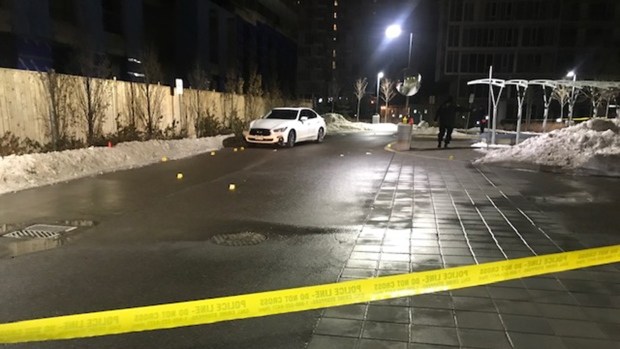 A white sedan and evidence markers are seen outside an apartment building on Wilson Avenue on Jan. 26, 2020. (Cristina Tenaglia/CP24)

A male victim is in hospital after he was shot, reportedly in the leg, outside an apartment building in North York early on Sunday morning.

A staff sergeant with Toronto police 32 Division says emergency crews were called to 555 Wilson Avenue, east of Allen Road, at 3:01 a.m. for a report of a shooting.

Investigators said a suspect approached a circular driveway outside the building and opened fire, striking a male.

He was taken to a hospital trauma centre in non-life-threatening condition.

Officers say they have “good” surveillance video of what occurred and the incident does not represent a threat to public safety.