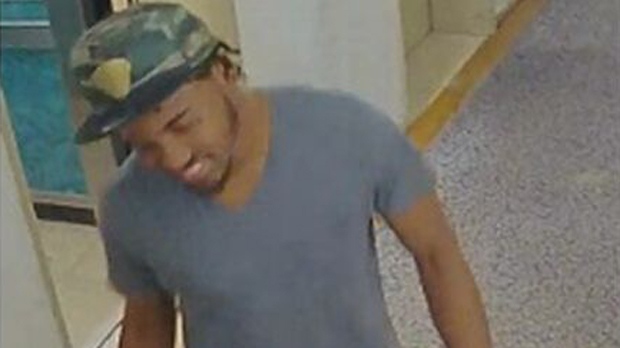 A suspect wanted in relation to an Aug. 14, 2019 sex assault is shown in a surveillance camera image. (TPS)

Police have released surveillance camera footage of a male suspect wanted after a 34-year-old woman was sexually assaulted in a Church and Wellesley-area apartment early on Wednesday morning.

Toronto police say that at about 1 a.m. Wednesday, the female victim was walking in the Church and Maitland streets area.

She had a brief interaction with an unknown man, who investigators said walked with her into an apartment building near Church and Alexander Streets.

Investigators allege that the male sexually assaulted the woman once inside an apartment.

He is described as a black male in his late 20s or early 30s, standing six-feet-three inches tall.

He has a muscular build, short braids and slight facial hair.