Male suspect sought after boy, 15, stabbed in thigh in Scarborough 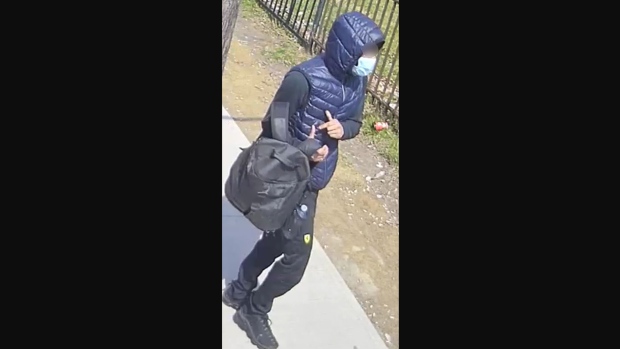 A male sought in a stabbing investigation is shown in a surveillance camera image. (TPS)

Police are searching for a male suspect after a 15-year-old boy was stabbed in the thigh after getting off of a transit bus in Scarborough in April.

Toronto police say that on April 6, before 1:20 p.m., a 15-year-old boy and a male suspect he did not know were both on a bus that departed Kennedy Station.

The boy later exited the bus at the corner of Midland Avenue and Eglinton Avenue East.

The suspect also got off the bus and began to follow the boy.

The boy was later stabbed in the back of his thigh, and fled the scene to call police.

He was rushed to a hospital for treatment of a non-life-threatening injury.

On Friday, police released images of a suspect.

He is described as likely to be under the age of 18, with brown skin and a thin build.

He was last seen wearing a blue bubble jacket, black pants with a Ferrari logo, black shoes, a black backpack and a blue medical mask.

Anyone with information about this incident is asked to call police at 416-808-4100.