Man, 21, left loaded handgun in south Etobicoke store, went back to retrieve it 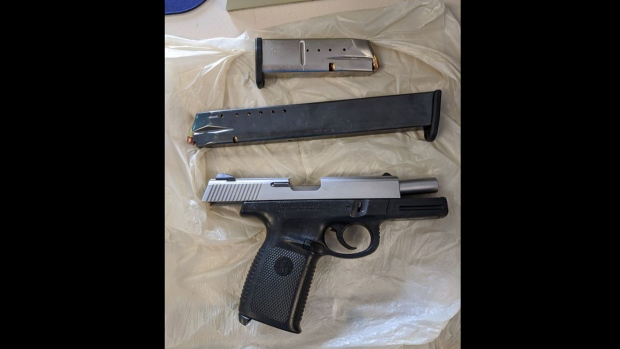 A .40 calibre Smith & Wesson handgun and an extended illegal magazine seized by police on June 1, 2020, is shown. (TPS)

A 21-year-old Toronto man is facing more than a dozen charges after he allegedly forgot a bag containing a loaded handgun inside a south Etobicoke store, and then was arrested when he went back to retrieve it.

Toronto police say that on Monday afternoon, a man was shopping in a store in the Brown’s Line and Evans Avenue area when he forgot a bag allegedly containing a loaded .40 calibre Smith & Wesson handgun and an extended magazine.

He then left the store.

A number of other shoppers in the store then found the bag and immediately called police.

A short time later, the suspect returned to retrieve the bag and was immediately taken in to custody.

Police identified him as Nigel Lopez.

He appeared in court at 2201 Finch Avenue West on Tuesday morning.

Anyone with information about this incident is asked to call police at 416-808-2200.