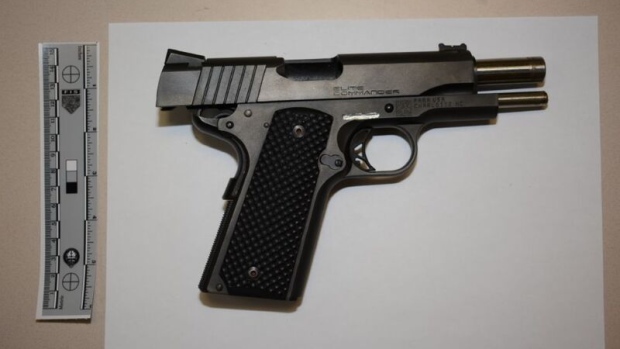 The photo shows a Para Ordinance Elite Commander .45 Calibre pistol which was seized allegedly from a 26-year-old man. (Toronto police)

A 26-year-old man is facing numerous charges in connection with a firearm investigation in North York.

Toronto police were called to the area of Finch Avenue West and Jayzel Drive, west of Weston Road, at around 3:19 a.m. on Saturday for a person with a gun.

Police said a 22-year-old man was standing near a gas station when he was approached by an unknown man who asked for a cigarette.

At some point, the unknown man allegedly displayed a gun hidden in his waistband before fleeing the area.

Following a search of the area, they found the armed man, police said.

As he was being arrested, the man allegedly reached for the gun in his waistband.

Police said the man struggled with officers but he was later brought into custody.