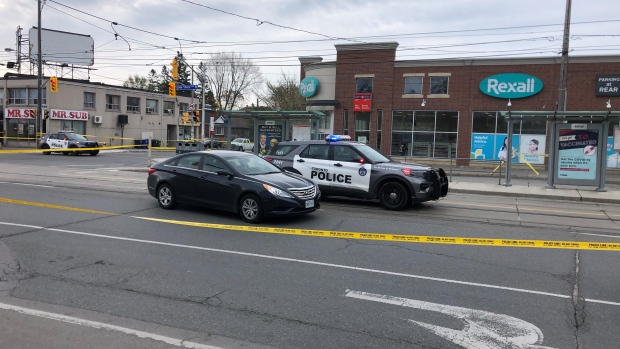 Police tape is shown at the scene of a shooting investigation in Toronto's Long Branch neighbourhood on Monday morning.(Sean MacInnes)

A 28-year-old man has been rushed to hospital in non-life threatening condition after he was shot while driving in the city’s Long Branch neighbourhood on Monday morning.

The shooting happened along Thirty Seventh Street near Lake Shore Boulevard at around 8:30 a.m.

Police say that it appears as though two suspects followed the victim into an area in a black hatchback and then pulled up alongside his vehicle and opened fire.

At least four shots were fired and the victim sustained a single gunshot wound to his lower body.

He was conscious and breathing at the scene.

“It sounds like two vehicles had seen each other and the suspect vehicle may have followed our victim into this area and then the two cars came door to door over on Thirty Seventh Street and that is where the shots were fired,” Duty Inspector Michael Williams told reporters at the scene. “Officers are on scene now canvassing for video and witnesses that may have been in the area. Lake Shore Boulevard is a busy street and we are hoping that someone had dash came video or may even have some cell phone video they can help us out with.”

Williams said that it appears as though the passenger of the hatchback opened fire through an open window and that the vehicle they were in then turned onto Lake Shore Boulevard, where it was last seen headed westbound.

He said that the victim’s vehicle had a total of four bullet holes and that four shell casings were also found on the street.

“This appears to be a targeted incident,” Williams said.

No suspect descriptions have been released at this point.

Lake Shore Boulevard was closed at Brown's Line for the polic investigation but reopened just before 11 a.m.