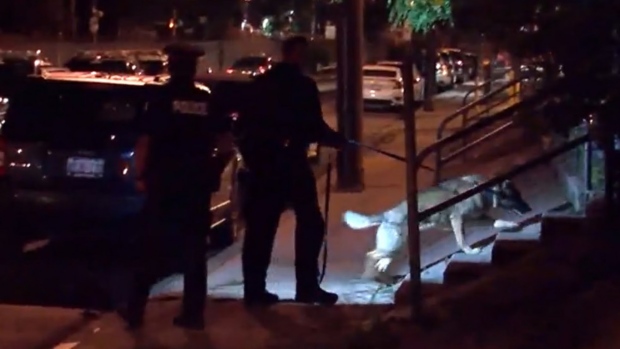 A 32-year-old man is in serious condition in hospital after he was shot in Toronto overnight.

Police said they were called to Humber Boulevard and Alliance Avenue at 11:44 p.m. Tuesday for multiple reports of shots fired.

They arrived to find a man in his 30s suffering from at least one gunshot wound.

Duty Insp. Michael Williams said the victim was having a barbecue with friends in the backyard of a townhouse when two male suspects wearing masks approached them.

They had a brief conversation before the masked men drew handguns and opened fire, striking the victim in the lower body.

The suspects then fled in an unknown direction.

Police said a search of the scene located a number of shell casings.

A canine unit was brought in to assist with the search.