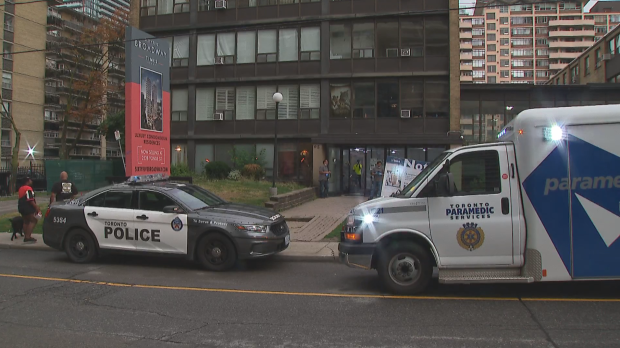 Toronto police say the stabbing happened in the lobby of a residential building near Yonge Street and Broadway Avenue Tuesday night.

Police have named a 55-year-old man accused of stabbing a city shelter worker at an interim housing site in Toronto's midtown neighbourhood on Tuesday night, and also allege he tried to attack other workers.

Yesterday, the city said the staff member was stabbed by a client while on a shift at one of the city's interim housing programs at 55/65 Broadway Avenue, near Yonge Street.

Police said the stabbing happened shortly after 7 p.m. in the lobby of the building.

A female victim believed to be in her 40s was found with stab wounds, police said, and was rushed to hospital with serious but non-life-threatening injuries.

Investigators said Wednesday the suspect also "rushed" at other municipal staff in the building before he was subdued by security guards.

The suspect was identified as Darren Hynes, 55, of Toronto.

He was charged with aggravated assault, assault with a weapon and weapons dangerous.

Hynes is expected to appear at College Park courts on Wednesday morning.

The city has promised a full review of security measures at the temporary housing site, which will close this month as it is slated to begin redevelopment in September.

Toronto Mayor John Tory said Wednesday his thoughts go out to the staff member who was hurt.

"I am very, very concerned about the wellbeing of our employee. I hope that they're recovering and I will make sure we do everything to support them and support their family."

He said that in the past week he has ordered increased police and security patrols in the area, along with the installation of new cameras.