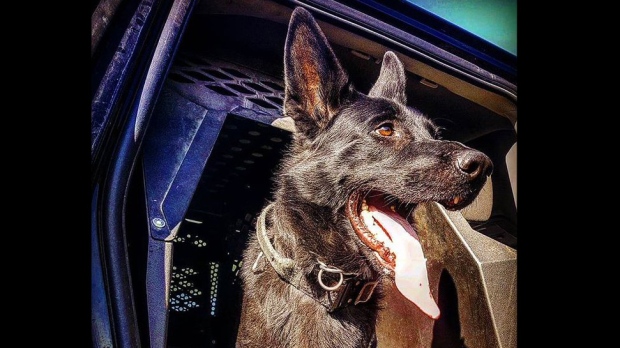 Rogue, a member of the K9 unit who police say was injured during a disturbance in Oshawa on Monday night, is seen in this file photo. (Durham Regional Police handout)

Officers were called to a residence on Olive Avenue in Oshawa at around 10:20 p.m. for a reported disturbance.

Police say an occupant of the home told officers that a male suspect, who appeared to be under the influence of drugs, was damaging furniture and smashing out the windows of the residence.

Police say as officers attempted to arrest the suspect, the male grabbed the collar of a police dog and began choking the animal.

Police say eventually officers were able to gain control of the suspect, who was then taken into custody.

The suspect sustained minor injuries after he was bitten by the dog and was taken to a local hospital for treatment.

According to investigators, the male continued to act in an “assaultive and aggressive manner” at the hospital and naloxone was administered.

He was later released from hospital on an undertaking.

The suspect has been charged with two counts of mischief, damaging property under $5,000, and willfully causing pain, suffering, or injury to an animal.

A 41-year-old from Oshawa is charged after taking the K-9 dog leash and choked K-9 Rogue. Officers were able to eventually gain control of the male and he was taken into custody. Male was bitten by the dog and taken to local hospital.