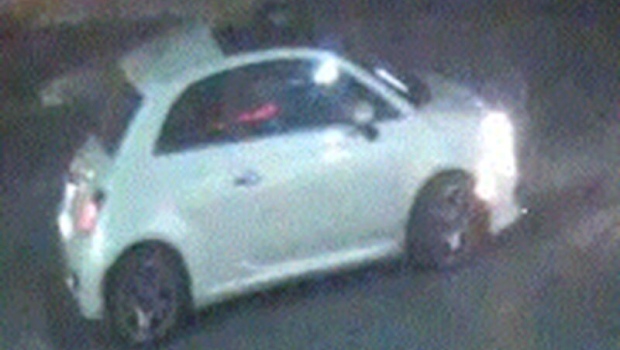 Police are looking for this white Fiat 500 after shots were fired in North York in September. (Handout)

Toronto police have made an arrest in connection with shots fired in North York last month.

On Sept. 25, police were called to the area of Keele Street and St. Regis Crescent, north of Sheppard Avenue West, around 5:11 a.m.

Witnesses told police that they heard gunshots and saw two vehicles leaving the area at a high rate of speed.

A surveillance video obtained by officers in the area showed an unknown person approached a silver sedan and fired shots toward Keele Street, police said.

The person then got into the vehicle and left the area.

A second vehicle, a white Fiat 500, was travelling north from St. Regis Crescent when a passenger allegedly extended their hand out of the window and fired shots into the air.

He is facing a dozen charges, including discharge a firearm being reckless to the life or safety of another person.

Investigators continue to look for three other people involved in the incident.

They have released images of the two suspect vehicles.

Police are looking for this silver sedan after shots were fired in North York in September. (Handout)