Toronto police say they are aware of an incident caught on the city’s “BloomCam” livestream in which a man is seen climbing one of High Park’s cherry blossom trees in the dead of night.

The 24-hour “BloomCam” was set up by the City of Toronto so that residents could watch the cherry blossoms bloom at any time of the day from their home, in keeping with physical distancing rules enacted due to the COVID-19 pandemic.

In the video, a man is seen walking into view of the camera with a bicycle. The man appears to climb up the cherry blossom tree and rests for a moment before coming down.

Another person is visible in the video for a short amount of time before the man returns to the tree, where he dangles and sways on one of its branches.

Toronto police have said that they are aware of the video, as well as other “damage and vandalism” that took place in High Park over the weekend.

“The actions by the man in the video are inappropriate at any time and could lead to charges such as trespass to property and/or mischief,” Const. Jennifer Sidhu said.

High Park closed last week to ensure residents complied with physical distancing rules. The park is typically crowded around this time of year because of the cherry blossoms, which have become quite the tourist attraction in Toronto.

The city hoped the “BloomCam,” as well as the promise of live events and virtual walks through the blossoming trees, would encourage residents to stay home and prevent the spread of COVID-19. They also warned that anyone caught violating the closure could face a fine of up to $5,000.

“Being in High Park is not currently permitted and certainly climbing the cherry trees, even in normal circumstances, is never permitted,” City of Toronto spokesperson Brad Ross said. “High Park will reopen at the conclusion of the trees’ peak bloom period, the timing of which is weather dependent.” 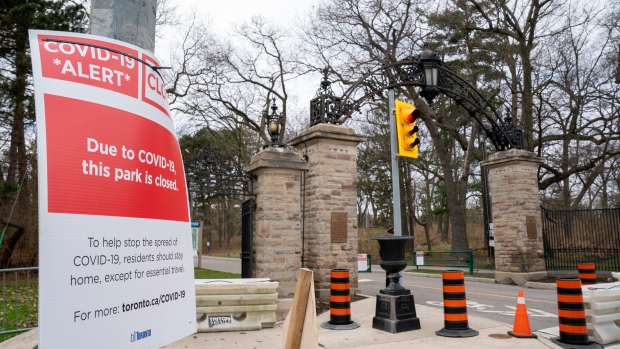 Speaking to reporters on Monday afternoon, Toronto Mayor John Tory said the people who climbed the cherry blossom trees would be excellent candidates to be "nominated for a Darwin award." He also said that with the exception of the two people who appear in the video, the "vast, vast majority" of Torontonians have been respecting the city's decision to close High Park.

"I think the people that climbed the tree, and I can’t imagine what appeal the concept of having a beer in a cherry tree in the middle of the night has and then posting it to Instagram. I don’t get that," Tory said.

"I think they would be excellent candidates on Toronto’s behalf to be nominated for a Darwin award for their behavior."

Tory added that he didn't decide to close the park because he was a "killjoy" or he didn't want residents to enjoy the blossoms. The decision was made on the recommendation of medical officials in order to help curb the spread of the deadly novel coronavirus. 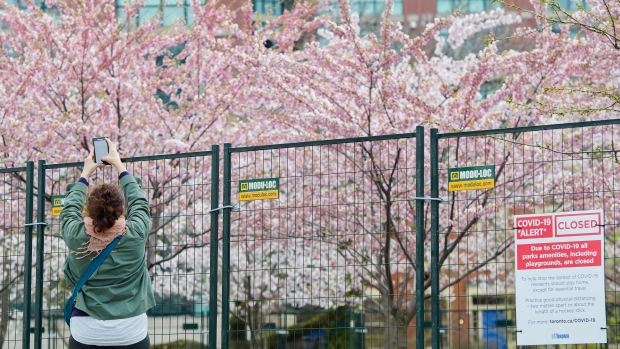 Police said that their officers will be onsite throughout the closure in addition to city bylaw officials.

“Officers continue to conduct patrols of entry ways, the park’s perimeter and onsite – including during the overnight hours - to ensure compliance with the closure,” Sidhu said.

The “BloomCam” is currently the only stationary camera in High Park, city officials said.

A man is seen on the city's "BloomCam" climbing a cherry blossom tree. (City of Toronto/BloomCam)

Fencing and blockades sit at the gates of High Park in Toronto on Friday, May 1, 2020. THE CANADIAN PRESS/Frank Gunn