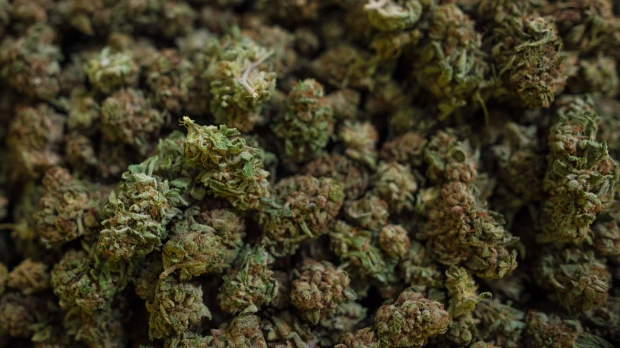 TORONTO -- A Toronto man who uses a wheelchair has filed a human rights complaint challenging Ontario's cannabis sales regulations, arguing the province's system discriminates against those with disabilities and limited financial means.

Ken Harrower, who uses cannabis to relieve symptoms from a condition affecting his joints and other medical issues, says the city has too few private retail stores, which he alleges are not wheelchair-accessible.

He also alleges the province's government-run online cannabis store is too slow to deliver the product and too expensive for those on government assistance or without credit.

"I often need (cannabis) urgently for pain relief and to help me to sleep. I need cannabis on an on-demand basis," he said Wednesday in a news conference.

"I am on (the Ontario Disability Support Program) and have very limited funds that barely cover my day-to-day expenses, I do not have enough money or the ability to purchase through the (Ontario Cannabis Store) system because I do not have available credit."

Harrower, 57, said he faces the same financial barriers and delays trying to purchase medicinal cannabis, which is also sold online.

"The poorly planned, phased approach for the roll-out of retail cannabis outlets as outlined by the Ontario government has neglected to take into account the needs of all Canadians," he said.

Pieters said they will be asking the tribunal for an expedited hearing to deal with the case, and are seeking a stay on enforcement of the cannabis regulations until the issues highlighted in the complaint are resolved.

The Ontario government did not immediately respond to a request for comment but has previously said it had to cap the number of retail cannabis stores at 25 indefinitely due to a national supply shortage.

The province's first private brick-and-mortar cannabis stores opened their doors on April 1, though not all those approved are ready for business even a month later. Licences for stores are granted through a lottery system followed by an approval process.

The provincial corporation tasked with the online sale and distribution of recreational cannabis also recently cancelled its tender for couriers to make same-day deliveries on pot orders.

The website faced criticism in the weeks after it launched last fall as consumers reported lengthy delivery delays and product shortages.

An organization that advocates for safe and responsible cannabis retailing practices, the Canadian Cannabis Retailers' Union, is seeking to intervene in the human rights challenge.

The group's lawyer, Jack Lloyd, said the case raises serious questions about the province's obligations to consumers both as a pot seller and distributor, and as the body regulating private sales of cannabis.

Lloyd said while cannabis supply is a national issue, the sales structure is provincial purview and the Ontario government has "regulated itself into this position."

"It's fairly urgent that the government act here," he said.