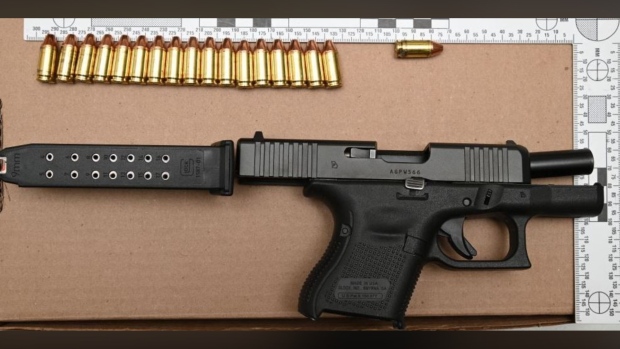 A Glock 26 9mm pistol loaded with 18 rounds of ammunition seen in this photo was allegedly recovered from a man while he was being arrested for assault. (Toronto Police Service)

A man is facing more than a dozen charges after a woman was assaulted and a loaded gun was recovered in North York.

Toronto police said they were initially called to the Jane Street and Shoreham Drive area on Sunday for a break-and-enter.

When they arrived, officers learned that a man had allegedly assaulted and threatened a woman. He was subsequently arrested at the scene.

As he was being taken into custody, officers allegedly recovered a Glock 26 9mm pistol with 18 rounds of ammunition from the man.

Police said 24-year-old Deshawn Walters was later charged with assault, unlawfully in a dwelling house, uttering threats, escaping lawful custody of a peace officer and 10 other firearm-related offences, including possession of a prohibited weapon.

Walters is scheduled to appear in court on Monday.