Toronto police have identified the 72-year-old woman who was killed inside a seniors home Wednesday night along with the suspect they have charged with murder.

Joycelyn Dickson died from injuries she received when she was assaulted inside Scarborough`s Wexford Retirement Home at 11:15 p.m.

A 91-year-old woman was also assaulted at the Lawrence Avenue and Pharmacy Road residence. She was taken to hospital with non-life-threatening injuries.

"There was an incident involving a male where two females were attacked,” Det. Sgt. Wayne Banks told reporters early Thursday morning. “Unfortunately one of the females succumbed to her injuries and was pronounced here at the scene by EMS. The homicide squad has taken carriage of the investigation and we are now in the process of interviewing staff and tenants that were here as we try to put the pieces of the puzzle together."

A suspect was taken into custody at the scene.

The relationship between the victims and the suspect is not known.

Police have seized one weapon that was allegedly used in the assaults, but have not said what type of weapon it is.

Officers were seen removing a wooden cane from the premises early Thursday morning.

Asked if dementia could have played a role in the attacks, Banks refused to speculate.

"It's something that we will definitely look into, but there is no information that we have presently at this time as to his state of mind or any physical or mental conditions that he has," he said.

Suspect Peter Roy Brooks, who is in custody, made a brief court appearance Thursday and is scheduled to return to court April 4. The 72-year-old man is charged with second-degree murder and aggravated assault. 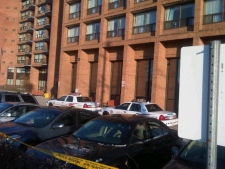 Police tape is shown outside a Scarborough senior's home on the morning of March 14, 2013. A 72-year-old woman is dead after she was assaulted inside the building. (Cam Woolley/CP24.com) 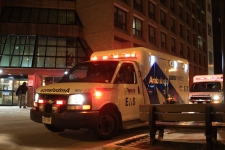 An ambulance is shown parked outside a Scarborough senior's home, where a 72-year-old woman was fatally assaulted on March 14, 2013. (Tom Stefanac)