Man dead after shooting in Mississauga

A man is dead after a shooting in Mississauga on Wednesday evening.

Peel police said they received a 911 call for a shooting in the area of Royal Windsor Drive and Southdown Road shortly after 9:30 p.m.

When officers arrived, they located a man with obvious signs of trauma in the parking lot.

He was pronounced dead at the scene. Police have not released his identity.

The homicide bureau has taken over the investigation. No suspect information was immediately available. 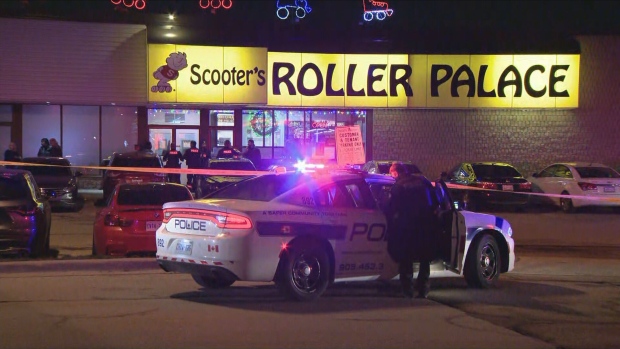 There was a significant police presence around Scooter's Roller Place. When asked where the shooting exactly occurred and the circumstances that led to the incident, Const. Donna Carlson said police have not determined those yet.

"It's very early on in this investigation. So there's not a lot of details that we know," Carlson said.

"There's a lot of people inside the building behind us and in the parking lot here, so we will be looking at interviewing and speaking to a variety of different people."

Carlson added that the incident is believed to be isolated, and there is no threat to public safety.

She asked anyone with information to contact police or Crime Stoppers.

"This is a very populated area, and we are reaching out to anybody in the area who may have heard or seen anything or witnessed anything to come forward and contact our investigators," Carlson said.