A man is dead and a woman has serious injuries following a targeted shooting in Oakville, Halton Regional Police say.

At around 1 a.m. on Friday, police responded to reports of shots fired outside a residence in the area of Belt Lane and Littlefield Road, north of the QEW.

Upon arrival, officers located a man and woman, both in their 20s, suffering from gunshot wounds.

"The suspects then appeared to have chased the male victim to the area right behind us here where he was fatally shot," Const. Steve Elms told reporters at the scene Friday morning.

The man was pronounced dead at the scene and the woman was taken to hospital in serious condition, police said.

Two male suspects reportedly fled the scene in a light-coloured SUV, according to Elms. 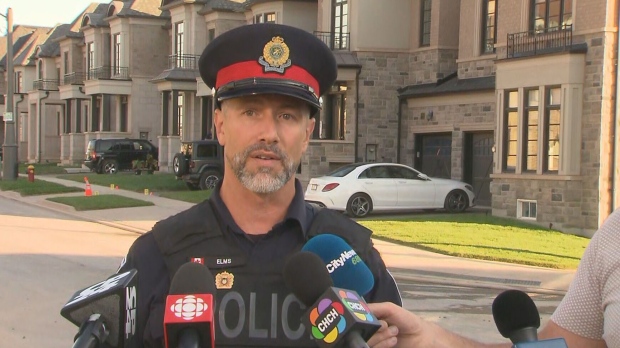 No suspect information has been released at this point in time.

The homicide unit is investigating and police believe the victims were targeted.

"Multiple gunshots were fired. I can say that multiple shots were fired into at least two residences as well. So obviously a careless use of firearms for the people that live in the area. It's scary for them, tragic for those involved here," Elms said.

"Obviously we're looking for any public information, any dashcam footage of people that were in the area at about one o'clock in the morning last night," Elms said.

Halton Police are currently investigating a shooting in-the area of Bronte Rd and Saw Whet, Oakville. Expect a heavy police presence in the area. There is no active threat to the public. More information will be provided at a later time.^MC

A man is dead and a woman has serious injuries after a shooting in Oakville on Friday, Aug. 19, 2022.