A man is dead and a woman has been rushed to hospital via emergency run following a daylight shooting in the city’s Glen Park neighbourhood.

It happened on Dufferin Street at Glencairn Avenue just south of Lawrence Avenue at around 3:30 p.m.

A witness who spoke with CP24 said that the victims had just arrived in the area in a black truck and were stepping out when a suspect got out of the passenger’s side of a idling hatchback and opened fire.

“Paramedics responded to the scene and performed life-saving measures. Unfortunately the male has been pronounced deceased and the female has been transported to a local trauma centre by emergency run,” Duty Inspector Michael Williams told reporters at the scene. “We are appealing to anyone who has been in the area with dash cam or any kind of video surveillance or any witness to come forward and help us put this together.” 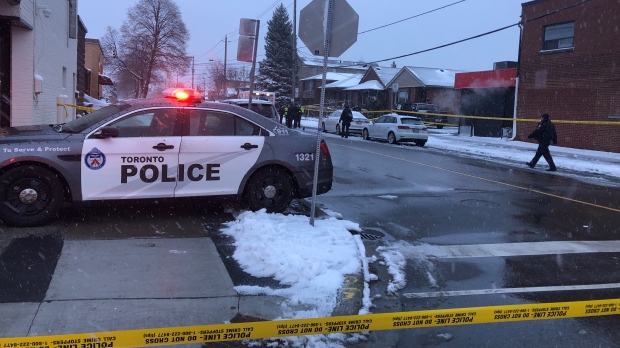 Few details have been released about the circumstances surrounding the shooting so far, though on Tuesday afternoon CP24’s cameras captured what appeared to be six to eight shell casings on the driver’s side of the vehicle.

The driver’s side window was also shattered.

Police say they are looking for a male suspect, who was possibly dressed in a grey track suit. He was seen fleeing the scene in a grey hatchback that was last seen headed eastbound on Glen Park Avenue.

Meanwhile, homicide detectives have been called to the scene. Roads in the area have also been closed to accommodate the investigation.