Man dies after being pulled from apartment fire in Regent Park 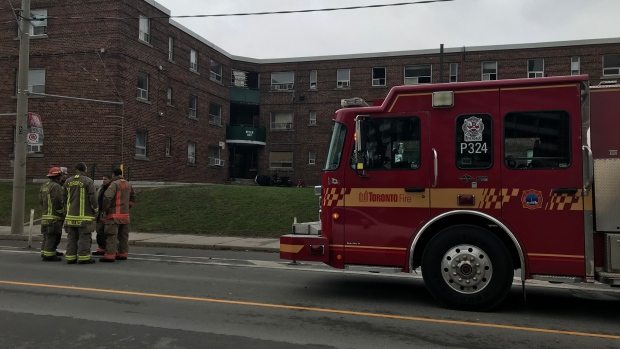 Firefighters are shown at the scene of an apartment fire on River Street near Gerrard Street on Sunday. (Brandon Gonez)

A man succumbed to his injuries in hospital after being pulled from an apartment fire in Regent Park on Sunday morning.

Toronto Fire Chief Matthew Pegg says that crews were dispatched to the low-rise Toronto Community Housing building near River and Gerrard Street at around 8:55 a.m. after a passerby saw smoke coming from the window of a third floor unit and dialed 911.

He said once on scene firefighters began an initial search of the unit and located one male inside.

He received CPR at the scene and was subsequently taken to hospital via emergency run but was later pronounced dead.

“We don’t have any indication as to origin, cause or circumstances right now,” Pegg said. “Our fire investigation team is here and they are working, as always, in collaboration with Toronto police. We also have notified the Office of the Ontario Fire Marshal and are awaiting the arrival of investigators who will assist with the investigation into the fire and ultimately help us understand exactly what happened here today.”

Pegg said that the victim, who is believed to be a middle-aged man, was the only resident of the unit where the fire occurred.

He said that he is thankful that crews were able to contain the fire to the originating unit and prevent any further injuries but is saddened by the “tragic loss” of one resident.

“On behalf of all of us at Toronto Fire Services I extend my sincere condolences to family, friends and everyone affected by this tragic loss here on Easter Sunday,” he said.

In a statement issued to CP24 on Sunday afternoon, a spokesperson for the Toronto Community Housing Corporation said that the fire alarm system inside the building was functioning properly.

The spokesperson said that staff with the TCHC will be in the building today “to support tenants and assist with the response to the fire.”

“We are saddened by the loss of life as a result of the fire. Our thoughts are with the family and loved ones of the deceased, the tenants and staff of the building, and the Regent Park community at this difficult time,” the spokesperson said.