A 33-year-old man has died in hospital following an interaction with Peel Regional Police in Brampton Wednesday night.

According to Const. Lilly Fitzpatrick, an officer pulled over a vehicle near Queen Street and Kennedy Road shortly after 10 p.m.

The officer requested a second unit and activated the emergency button on his portable radio. More officers began heading to the area and reports came in that shots had been fired.

The male victim had been shot by an officer, said Const. Fitzpatrick.

It is not known how many bullets struck the man, but eyewitnesses told CP24 that they heard about five gun shots ring out and that the victim appeared to be a black man.

Witnesses said attempts were made to resuscitate the man at the scene. Peel Regional Paramedic Services said the patient was transported with vital signs absent to Brampton Civic Hospital.

Chris, a Brampton resident who lives in the area, said he was walking out of a storefront when he saw that police had pulled a car over. He disregarded it as a routine traffic stop which is common in the neighbourhood, he said.

“I looked away. I heard about five shots ring out pretty fast and then I looked back over and then right then and there, I saw one cop in a shooting stance,” he said. “And then a guy laying face down on the ground, and then shortly after that, about 15 or so cop cars came flying up on the scene.”

Bullet casings marked by cone markers could be seen on the ground, said Chris, who did not provide a last name.

A black Jetta car – the one that police pulled over – could also been seen.

Richard Appleby, another witness at the scene told CP24 that he heard the police officers say “Drop the knife” a couple of times and words to the effect of “Don’t make us shoot.”

“He walked slowly towards them with both arms stretched,” said Appleby. “I was too far to see a knife. It might have been small.”

One woman, Latisha, who did not want to give her last name said she was driving by on Queen Street when she saw the man come out of his car with his hands raised above his head.

“He had his hands up… saying ‘What?’ to the cops and he started walking towards them,” said Latisha. “As I drove by, I didn’t get to look back but I just heard gunshots, like five gun shots.”

The Special Investigations Unit, an arm’s-length provincial agency that is called in when there is a civilian death or serious injury involving police, is investigating the incident. They were on scene collecting evidence early Thursday morning.

Queen Street was closed till 11 a.m. Thursday between Kennedy Road and Rutherford Road while police took photographs and documented evidence at the scene. 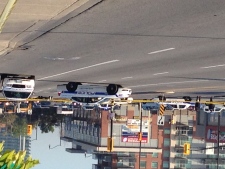 Police tape is shown at the scene of a shooting in Brampton early Thursday morning. A man has died in hospital following an interaction with Peel Regional Police near Queen Street and Kennedy Road on Wednesday night. (Pat Darrah/CTV)