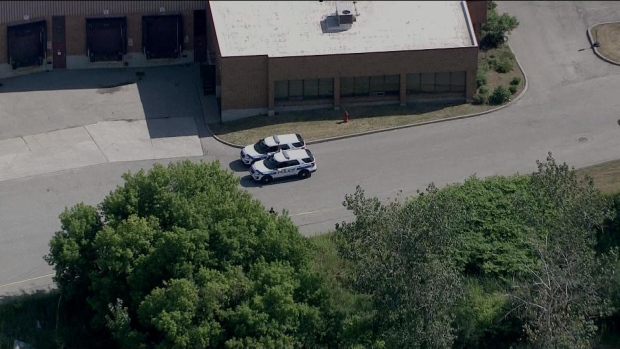 Police are shown at the scene of a sudden death investigation in Brampton on Thursday morning.

Homicide detectives have taken over the investigation into a sudden death in Brampton.

Police say that an adult male victim was found near a creek in the Steeles Avenue and West Drive area at around 8 a.m.

He was without vital signs at the scene but was taken to a local hospital where he was pronounced dead.

A cause of death has not been provided, though police have said that the victim had "obvious signs of trauma."

The death is now being treated as a homicide.

Police have set up a perimeter at the scene.

"Investigators will be going to the different businesses and looking to speak with people in the area," Const. Heather Cannon told reporters at the scene. "They are also appealing to the public so if anybody knows of anything that has occurred here or can check their video surveillance or dashcam videos for anything.”

Cannon said that police were first dispatched to the area after receiving a phone call for a deceased individual.

The man was later identified as Wayne Wojcichowsky, 47, of Brampton.