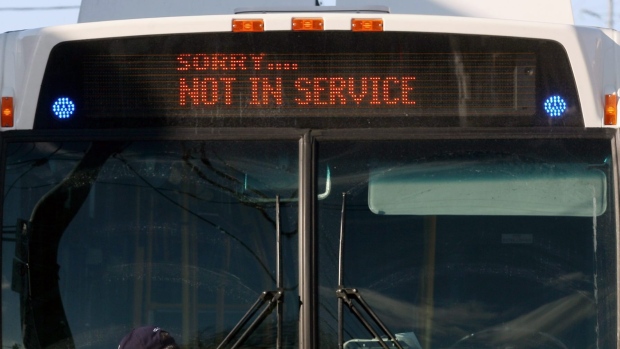 A TTC bus is seen in Toronto on Monday, February 23, 2009. THE CANADIAN PRESS/Darren Calabrese

TORONTO - A man who went on a racist tirade and grabbed a masked female Chinese student on a city bus at the start of the pandemic has been handed four months house arrest.

In sentencing Michael Hennesy, 47, for assault, the Ontario court judge noted the physical attack was relatively minor but still had a severe effect on the victim.

“This offence shows how vulnerable society is to the ugly reality of racism and how quickly it can spread, and how scared and vulnerable its targets are,” Judge Howard Borenstein said. “Racism is awful on its own given the dehumanizing effects it can have, and it often can lead to physical violence, which is what occurred here.”

Evidence was that the student from China was sitting minding her own business on a downtown bus on an afternoon in February last year when Hennesy boarded. The student was wearing a medical mask.

In the four minutes he was on the bus, Hennesy declared himself Canadian, hurled profanities at her, insulted Chinese people, and told her to go back to where she came from.

The student began recording the tirade, prompting Hennesy to grab her arm in an effort to get her phone. She hit him across the face, screamed at him, and hung on to her phone, court documents show.

Hennesy, who pleaded guilty last month, turned himself in after TV broadcast his image.

The pandemic has sparked a surge in crimes against Asian people across North America, with victims often blamed for COVID-19 amid false allegations that China had deliberately unleashed the virus.

“Victims were subject to derogatory comments, and were either punched, pushed or spat on by the suspect(s),” the report said.

In sentencing the first-time offender, Borenstein referenced the “disturbing increase” in anti-Asian sentiment.

The impact on the student, he said, was “extreme.” Among other things, she said she was unable to finish her semester, felt forced to move, and needed therapy.

As mitigating factors, the judge noted Hennesy, who has long battled addictions, was drunk at the time, had apologized to the student, and was in counselling. His childhood was at times abusive and violent. He was five when his father killed his mother, the judge said.

After living in shelters or community housing for the past eight years, he has now moved back to his native Newfoundland.

Despite Hennesy's assertions, backed by a doctor, therapist and sister, that he showed no signs of racism before the attack, Borenstein was skeptical.

“The aggravating features of this case is the racist nature of this attack and its impact on (the student) and beyond her, to others especially in the Asian community who feel more insecure and unsafe when this happens,” the judge said.

Borenstein opted for the four months house arrest along with a year's probation, and ordered Hennesy to do 30 hours of community service.