Man hit and dragged by car downtown, driver in custody after fleeing scene 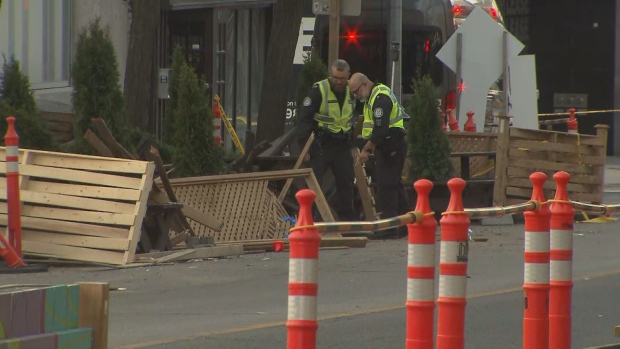 Police are shown investigating at the scene of a hit-and-run in Toronto’s Church-Wellesley Village on Saturday morning.

A pedestrian was rushed to hospital with critical injuries after a hit-and-run in Toronto’s Church-Wellesley Village overnight.

Police said that the victim, a 36-year-old man, was on the east side of Church Street in a northbound lane shortly after midnight when he was struck by a grey Honda minivan.

The authorities said that the victim was then dragged for approximately 100 metres, at which point the vehicle crashed into an outdoor patio set up in a curb lane north of Wood Street.

The pedestrian was transported to hospital in life-threatening condition via emergency run.

Police said that the suspect initially fled the scene but was later arrested near Wellesley and Sherbourne streets.

His vehicle was located nearby on Jarvis Street, according to police.

Church Street remains closed in both directions at Alexander Street as a full investigation is conducted at the scene.

“Investigators are appealing for witnesses, or anyone with dash-camera footage that were in the area at the time to contact police,” a press release issued on Sunday morning states.