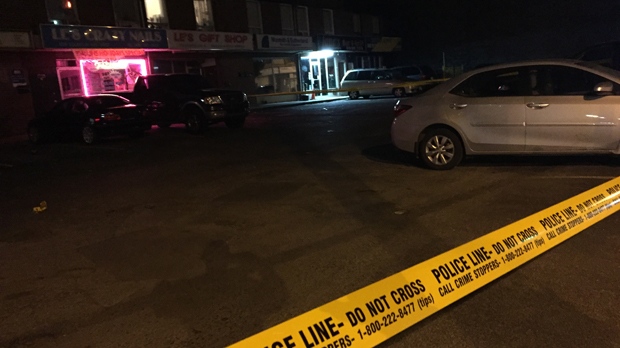 A commercial plaza at 1721 Eglinton Avenue West is shown on May 18, 2018, after a shooting took place nearby. (Michael Nguyen/CP24)

Toronto police say a man is in non-life-threatening condition after he was shot outside a bar in Toronto’s Fairbank neighbourhood on Thursday night.

Police were called to a bar at 1721 Eglinton Avenue West, between Dufferin Street and Oakwood Avenue, just before 10 p.m. for a report of a shooting.

They arrived to find what appeared to be a blood trail. Witnessed told police a vehicle was seen speeding away from the scene.

At about 10:20 p.m., police said they were made aware that a man reported to hospital suffering from several gunshot wounds.