A 26-year-old man has been rushed to hospital with serious injuries after a shooting outside Scarborough Town Centre on Friday afternoon.

Police say that the victim was “situated outside” one of the entrances on the west side of the mall when he was shot at around 2 p.m.

They say that he sustained a single gunshot wound to his abdomen as a result and was transported to hospital via ground ambulance.

Police have since recovered a vehicle that they say “may be related to the shooting." The vehicle is being held pending the arrival of forensics officers, who will comb it for evidence.

“The information we have was that the victim was situated outside the mall. It is too early to tell whether this was targeted,” Insp. Paul Rinkoff told reporters at the scene on Friday afternoon. “We don’t know the motive at this time. But our investigators are on scene, we are interviewing (witnesses) and hopefully we will be speaking to the victim shortly.” 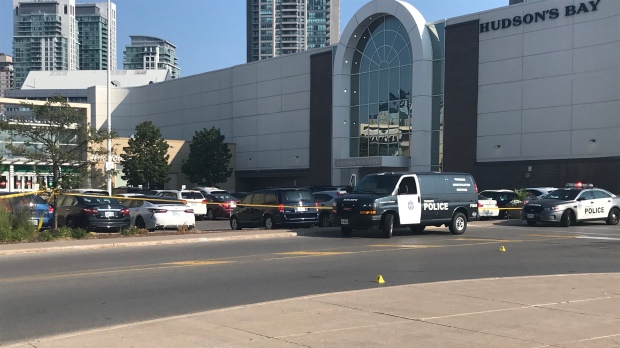 Police were initially dispatched to the mall near Ellesmere and McCowan roads after recieving multiple 911 calls for the sounds of gunshots.

Rinkoff said that police do not currently have any suspect descriptions, though he said that information could be "forthcoming."

He said that right now officers have closed the entrance to the mall near where the shooting took place and have locked down the immediate area.  Operations inside the mall, however, remain unaffected by the ongoing investigation.

“Police are interviewing any witnesses that may have been at the mall either shopping or driving by in cars at the time of the shooting and we are appealing to anyone who may have heard the gunshots or saw what may have happened today,” Rinkoff said.