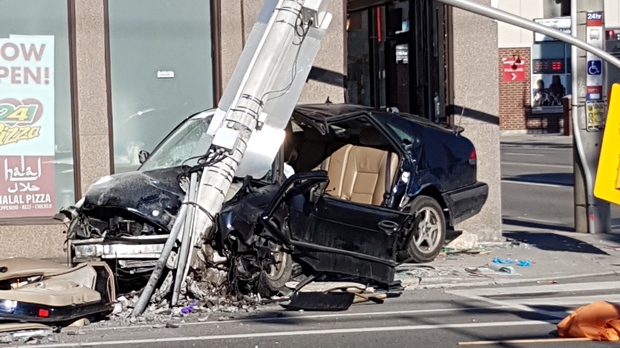 A Saab sedan involved in a collision in Corktown is seen on Jan. 1, 2017. (Sylvia Clark)

A man is in serious but non-life-threatening condition after a vehicle hit a pole and then the front of a pizza store in Toronto’s Corktown neighbourhood on Sunday morning.

A man and woman were in a Saab sedan driving in the Parliament and Richmond streets area before 10:20 a.m. when the collision occurred, police said.

The pole was knocked down and officers said Parliament Street would be closed while it was repaired.

The woman was not injured, but it was initially reported that the man was critically hurt. Later on Sunday afternoon, police said the man was in non-life-threatening condition.