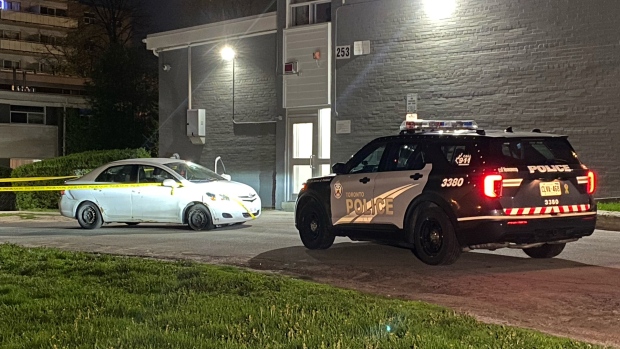 A police vehicle is seen on Roywood Drive after a man was injured in a shooting on May 12, 2022. (Mike Nguyen/CP24)

A man is in hospital after he was found shot in the driveway of a North York townhouse complex overnight.

Toronto police say they were called to Roywood Drive, near York Mills Road and the Don Valley Parkway at 12:30 a.m. Thursday for a report of a shooting.

They arrived to find a man suffering from a gunshot wound.

He was taken to a local hospital trauma centre for treatment.

Officers also located a white Toyota sedan with a bullet hole in its windshield.

Investigators say they believe the shooting occurred east of where the victim was found, somewhere on Ellesmere Road.