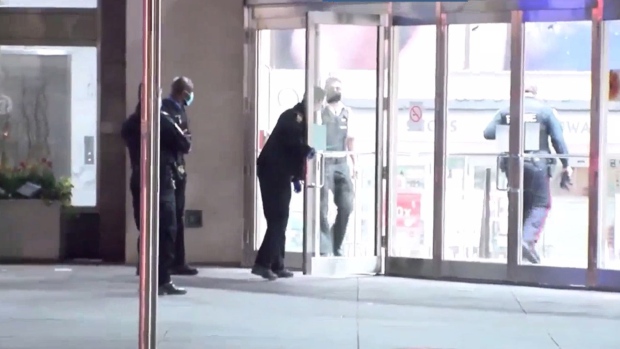 Police and security personnel are seen at an entrance to Hudson Bay Centre after a stabbing inside Bloor-Yonge subway station on May 2, 2021 (CP24)

A man is in serious condition in hospital after he was stabbed multiple times inside Toronto’s Bloor-Yonge subway station early on Sunday morning, police say.

Toronto police say they were called to the transit hub at 1:11 a.m. for reports that man had been stabbed.

Emergency crews arrived to find a man suffering from stab wounds to the neck and arm.

He was rushed to a hospital trauma centre in serious condition.

No suspect information was provided by investigators.

The TTC said trains bypassed the station for the remainder of the service schedule.