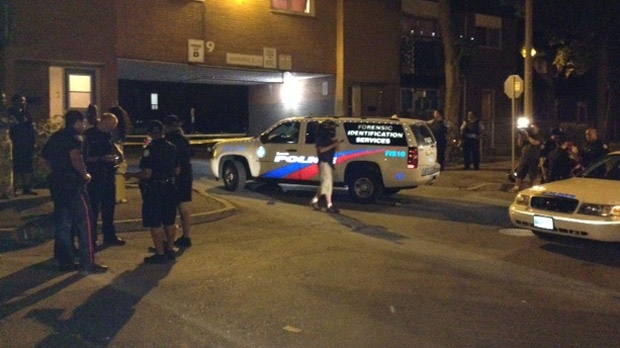 Police at the scene of a shooting on Driftwood Court on Friday, July 20, 2012. (CP24/Cristina Tenaglia)

A 30-year-old man who was shot in the head in what Toronto police believe was a targeted shooting has died of his injuries.

Brampton resident Donald Levy was with his two-year-old child when he was shot outside a housing complex at 9 Driftwood Ct. the night of July 20.

He was in life-threatening condition when he was rushed to hospital, where he spent more than a week before he died Wednesday.

Police haven’t been able to lay charges, even though there were witnesses in the area at the time of the slaying, which is Toronto’s 32nd homicide of 2012.

Police are urging those witnesses to come forward and speak to detectives.

Levy was one of four people to be shot in three separate shootings in Toronto in a 24-hour span.

That week, six shootings occurred in as many days, killing five people and injuring more than 20.

Of those incidents, most of the victims were wounded in a shootout at a community barbecue on Danzig Street.