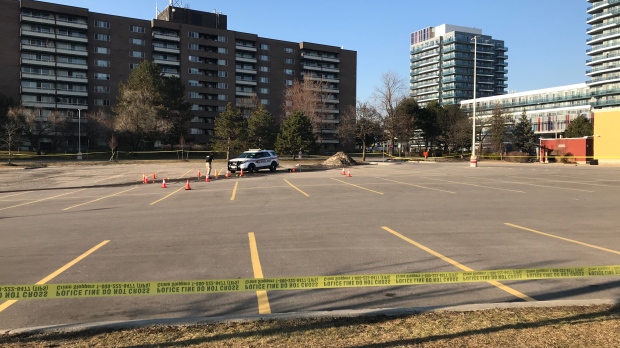 York Regional police are investigating after an officer was allegedly assaulted outside a Richmond Hill mall on Friday, March 27, 2020. (Beatrice Vaisman)

York Regional Police have named a 22-year-old man accused of severely beating one of its officers, allegedly with his own expandable baton, in the parking lot of a mall in Richmond Hill on Friday afternoon.

Investigators said that at about 3:40 p.m. on Friday, an officer was parked in his cruiser at Hillcrest Mall, near Yonge Street and Carrville Road, near the Marshall’s store in the mall.

A man approached him and allegedly began to hit him as he sat inside his cruiser.

A witness told CP24 the suspect then got the officer out of the vehicle and continued to strike him numerous times.

Investigators say the officer was able to radio for help.

A witness told CP24 Friday she feared the suspect was going to kill the officer.

Police allege the suspect got ahold of the officer’s expandable baton and struck him with it.

The officer, who has served in York Region for four years, remained in hospital Saturday with serious but non-life-threatening injuries.

The suspect was detained by officers a short distance away from where the assault allegedly took place.

He was identified on Saturday as Chidubem Anthony Okeke, of no fixed address.

He was charged with attempted murder and breach of recognizance.

Okeke will appear in a Newmarket courtroom today for a bail hearing.