Man, woman charged with impaired driving were both in driver's seat during Vaughan crash: police 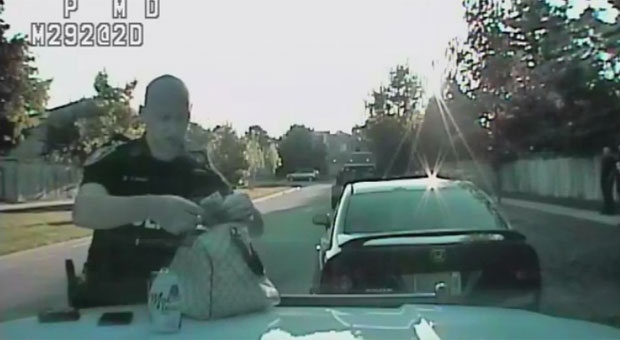 Police say a man and woman charged with impaired driving were both sitting in the driver's seat when they crashed their car in Vaughan on Sept. 4, 2019.

Police say a man and woman charged with impaired driving following a single-vehicle crash in Vaughan earlier this week were both sitting in the driver’s seat when the vehicle veered off of the road and struck a pole.

The collision occurred in the area of Regency Gate and Franklin Avenue at around 7 a.m. on Sept. 4.

Police say a blue Honda Civic left the roadway near the intersection, collided with a pole, and then continued down the road.

According to police, officers arrived on scene to find a male and female standing beside the vehicle, which had damage to its front end.

Police allege that the officers saw two open cans of beer on the road behind the vehicle along with a trail of debris leading to the pole that had been knocked over.

“Officers learned that both the male and the female had been seated in the driver’s seat and were both operating the vehicle when it left the roadway,” a news release issued by York Regional Police on Friday read.

Police also say that officers could smell alcohol coming from both occupants of the car, who were subsequently arrested on suspicion of impaired driving.

Investigators allege that they both failed breath tests when they were taken to a nearby police station.

In dash camera video released by police, officers are heard questioning the male suspect about what transpired.

In the video, the man is heard telling one officer that he and the female had an argument about whether they should drive or order an Uber to get them to their destination.

The 31-year-old man and the 26-year-old woman have each been charged with impaired operation and dangerous operation of a motor-vehicle.