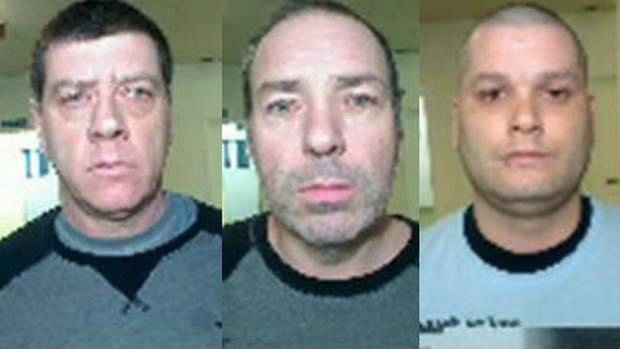 MONTREAL -- The search widened Sunday for three Quebec inmates who used a helicopter to make a brazen escape from jail as dusk approached a day earlier.

Authorities were put on alert across the province, in the rest of Canada, and in the United States, according to Quebec provincial police.

"We have co-operation with all the police forces across the country and abroad also," said Sgt. Gregory Gomez.

"We have many, many officers who are scattering all the areas possible. Investigators are, of course, checking every lead."

Police were reluctant to provide many details about their investigation for fear the escapees could be monitoring media reports.

The escapees were identified as Yves Denis, 35, Denis Lefebvre, 53, and Serge Pomerleau, 49.

The men fled from the Orsainville Detention Centre barbed wire in suburban Quebec City around 7:45 p.m. with the help of a green-coloured helicopter.

The facility is lined with barbed-wire fencing and features a watch post.

The chopper landed in a courtyard of the detention centre then quickly took off again heading west, perhaps toward Trois-Rivieres or Montreal, police said.

Quebec's public security ministry did not immediately return a request for comment.

It's the second helicopter jailbreak in the province in 15 months.

The three men were being held at the detention centre waiting to stand trial. It was not immediately clear what charges they were facing.

Police released photos of the three men on social media and appealed to the public for help, but warned anyone who spotted them not to approach and immediately contact police.

Audrey-Anne Bilodeau, another police spokeswoman, said Saturday police were working with surrounding airports and Quebec's Valcartier military base to help track down the chopper.

The Orsainville Detention Centre, about 10 kilometres from the centre of Quebec City, can hold up to 710 offenders.

In 2010, it was the scene of a fire and a violent skirmish that ended with two inmates dead and another six rushed to hospital.

It was also the scene of a riot in February 2008, which was apparently triggered by a smoking ban at the facility.

Two inmates made a similar break from a St-Jerome, Que., prison in March 2013.

A helicopter pilot was forced at gunpoint to fly to the prison on a Sunday afternoon.

Two inmates at the facility, which is about 60 kilometres from Montreal, climbed a rope ladder into the hovering helicopter and fled.

The two escapees and the two men accused of hijacking the chopper were picked up by police in Mont-Tremblant, about 85 kilometres away, within a few hours of the escape.