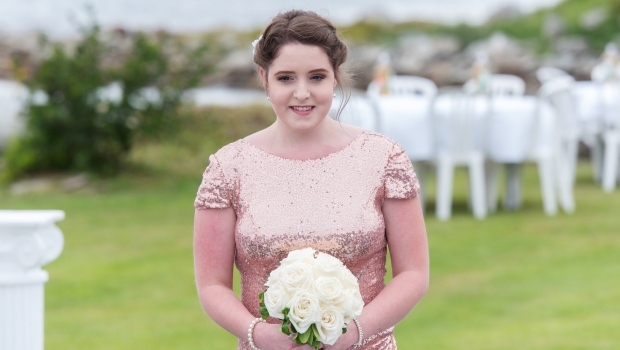 Chantelle Lindsay takes part in her friend Hannah MacDonald's wedding in this handout photo. Mark Lindsay wishes his daughter, Chantelle, were here to see the fruitions of her fight to bring transformational new therapies for cystic fibrosis to Canada. But Lindsay knows the 23-year-old, who died of complications from the disease in February, would be elated to know that other patients may be one step closer to benefiting from the treatment she couldn't access. THE CANADIAN PRESS/HO, Trevor Allen Photography

Mark Lindsay wishes his daughter, Chantelle, were here to see the fruition of her fight to bring transformational new therapies for cystic fibrosis to Canada.

But Lindsay knows the 23-year-old, who died of complications from the disease in February, would be elated to know that other patients may be one step closer to benefiting from the treatment she couldn't access.

Following a standoff with federal authorities over drug-pricing regulations, Vertex Pharmaceuticals said in a statement Tuesday that it's taking steps to bring its new cystic fibrosis medicines to Canada. Health Canada says it has yet to receive an official application for the drug to approved.

The news was “bittersweet” for Mark Lindsay, who unsuccessfully campaigned for permission to put Chantelle Lindsay on the Vertex-manufactured therapy Trikafta, which experts say has the potential to extend and improve the lives of 90 per cent of cystic fibrosis patients.

“We told Chantelle we'd continue the fight. And we did. And I just wish she was here,” he said, choking back tears, from Truro, N.S.

“I'm sure she'd be looking down and smiling with her little grin, and equally as happy as us.”

The Lindsays' loss became a rallying cry in health advocates' sustained campaign to help Canadians with cystic fibrosis gain access to Trikafta, which has been approved in the U.S. for about a year.

Vertex declined to explain why it delayed applying for the drug to be approved by Health Canada, but said it continues to have concerns about federal drug pricing reforms that come into effect on Jan. 1.

The company said it reviewed the final regulations released by the arm's-length Patented Medicine Prices Review Board last month, and decided to move forward with its new cystic fibrosis treatments in Canada in spite of its reservations.

“We remain genuinely concerned that the PMPRB Guidelines may impact access for Canadians to new innovative medicines in the future,” the manufacturer said Tuesday in a statement.

A Vertex spokesman said any drug applications will be posted on Health Canada's website.

Health Canada is in contact with Vertex about Trikafta, but has not received a submission to market the drug, a spokesman said in an email Tuesday evening. Geoffroy Legault-Thivierge said the agency cannot release information about a potential submission before it's officially filed.

The PMPRB declined to comment on Vertex's objections to its guidelines.

Cystic Fibrosis Canada said the development could have “life-changing” consequences for many of the estimated 4,300 people with cystic fibrosis in Canada, calling Trikafta “the greatest innovation in the history” of treatments for the fatal genetic disease.

“It gives them hope and an ability to really, truly dream about the future in a way that they couldn't have done before.”

Grover said Trikafta could have a profound impact on many cystic fibrosis patients because rather than simply managing symptoms, it addresses the root cause of the disease.

Doctors say the three-drug therapy targets a faulty protein that causes the buildup of mucus that clogs the lungs and gums up the digestive system.

In countries where the drug has been approved, patients are seeing dramatic health benefits, said Grover. If Canada were to join that list next year, the median survival age for a child born with cystic fibrosis could be extended by 9.2 years by 2030, according to Canadian research released in August.

However, Grover cautions that convincing Vertex to bring Trikafta to Canada only marks “the first hurdle” in the long regulatory battle ahead.

The drug can cost American patients as much as US$300,000 a year. Grover said federal authorities still have to work out a maximum price for the drug, and then the provinces have to figure out how much patients will have to pay for it.

She said several of the stakeholders have indicated that they're committed to moving this process along in a timely manner.

Chris McDougall, a patient advocate in Regina, said Canada's cystic fibrosis community intends to hold them to that promise.

“It's a moment to celebrate a major milestone,” said McDougall. “It's also a moment to not take our foot off the gas.”

McDougall said young patients like his daughter, Ella, perhaps stand to see some of the greatest gains from Trikafta over time.

He said the 10-year-old has already had some health struggles. McDougall said he hopes the drug will pause the progression of the disease.

Today, Canadians born with cystic fibrosis have an estimated median survival age of around 50, according to Cystic Fibrosis Canada. McDougall hopes Trikafta will be the “game-changer” that gives his daughter and every other child with cystic fibrosis a near-normal life expectancy.

Nicole Turple, 29, believes Trikafta could be the “miracle” that spares future generations from the lung damage she has suffered.

She heard the news about Trikafta while in bed at a Halifax hospital, where she's spent weeks after catching an infection. In keeping with COVID-19 constraints, she's allowed two visitors - her fiance and Chantelle Lindsay's mother.

Turple became close with the Lindsays after they offered to give her some of their late daughter's leftover medication while she waited for her insurance company to cover the costs of her treatment.

After exceeding her $50,000 cap, Turple had to go off the drug, and she believes the withdrawal contributed to her current health condition.

Turple said she and the rest of the cystic fibrosis community have “begged, pleaded and prayed” for change, flooding social media with their stories, inundating lawmakers with phone calls, letters and holding virtual rallies.

Now, Turple said it seems like their efforts have finally paid off. But the battle to make Trikafta affordable and accessible to patients in every province continues.

“My whole life, I've been told I'm going to die. That (cystic fibrosis) is going to take me,” she said.

“All of a sudden, Trikafta is coming to Canada ... That's what's going to save me. It's going to change my whole life.”

This report by The Canadian Press was first published Nov. 10, 2020.