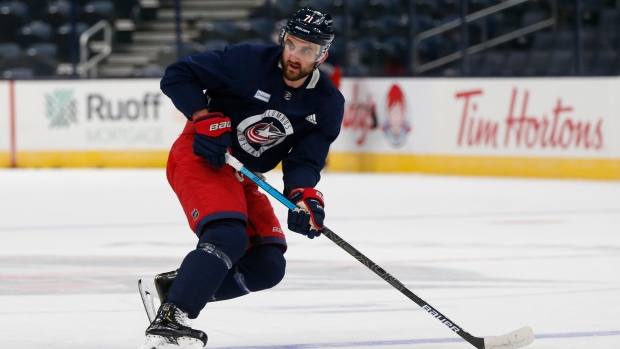 TORONTO - The Toronto Maple Leafs have added more grit and leadership ahead of the NHL trade deadline.

The club acquired forward Nick Foligno from the Columbus Blue Jackets on Sunday in a three-team deal that also included the San Jose Sharks.

Columbus secured Toronto's first-round pick in the 2021 NHL draft and fourth-round selection in 2022, while San Jose gets the Leafs' fourth rounder in 2021.

The Blue Jackets will retain 50 per cent of Foligno's contract, while the Sharks earn a pick for retaining the other half of his US$5.5-million salary cap hit.

“Obviously I'm thrilled,” Foligno said in a text message to The Canadian Press. “It's a great opportunity for me to join a team and work towards winning a Cup. It's really emotional and hard to leave Columbus during what's been a tough season for us but to have the chance to chase a Cup with a team I believe is close, is all you can ask for.

“Looking forward to helping this group any way I can.”

Toronto also got minor-league forward Stefan Noesen from San Jose in the deal.

The trade deadline is set for Monday at 3 p.m. ET.

Set to become an unrestricted free agent this summer, the 33-year-old Foligno had seven goals and 16 points in 42 games with Columbus this season. The son of former Leafs winger Mike Foligno has registered 203 goals and 482 points in 950 career regular-season contests with Columbus and the Ottawa Senators.

Named the sixth captain in Blue Jackets history in May 2015, Foligno has added nine goals and 22 points in 51 playoff contests.

The Buffalo, N.Y., native, who was selected 28th overall by the Ottawa Senators in 2006, will have to quarantine for seven days once he arrives in Canada before joining his new team.

Blue Jackets general manager Jarmo Kekalainen paid tribute to his now-former player - originally acquired from Ottawa for defenceman Marc Methot in 2012 - after the deal was announced.

“Nick Foligno has been everything you'd want in a captain, in a representative of your team and ambassador for your community. His contributions to the Blue Jackets franchise and the impact he and his family have had off the ice is immeasurable,” Kekalainen said in a statement. “We are grateful for everything he, Janelle, and their family have done for and with us over the past nine years.

“Given where we are right now, this move made sense for us as an organization and for Nick.”

Currently sit first in the Canadian-based North Division, Toronto beefed up its grit and leadership in the fall by signing Joe Thornton, Wayne Simmonds and Zach Bogosian in free agency after getting bounced from last summer's NHL post-season by Foligno's Blue Jackets.

Foligno, who played alongside Leafs forward Jason Spezza with the Senators, will know at least one other player when he gets to Toronto after the team acquired centre Riley Nash from the Blue Jackets on Friday.

Noesen has split his 2020-21 season between the Sharks and AHL's San Jose Barracuda. The 28-year-old played five games for the Sharks without registering a point, and had two goals and four assists in 12 outings with the Barracuda.

The native of Plano, Texas, native has 31 goals and 54 points in 204 career NHL games with four different teams. Originally drafted 21st overall by Ottawa in 2011, Noesen has added a goal in four playoff contests.

This report by The Canadian Press was first published April 11, 2021.